COLUMBUS, Mississippi (WCBI) – Milder weather is on the way, but it comes with several chances for rain.

WEDNESDAY: Expect lots of sunshine through the day with high clouds rolling in late. Highs will top out in the mid to upper 60s, making for quite pleasant travel locally or regionally.

THANKSGIVING DAY: The day should start dry & mostly cloudy. In fact, the rain looks to hold off for the most part until after 3p. Any last minute runs to any grocery store should be dry! However, rain will develop into the state after 3p, becoming widespread and locally heavy after 6p into the nighttime. Our Egg Bowl forecast remains rainy, so go prepared! 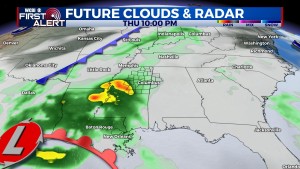 BLACK FRIDAY: Locally heavy rain could stick around into the pre-dawn hours, but a good portion of the day may end up dry as we’ll be in between storm systems. Rain becomes possible again in the evening hours, so try and shop during the daytime!

WEEKEND: Another round of showers and potential storms will move in Saturday morning. They should clear the region by Saturday late-day, leaving for some drier weather by Sunday. Highs will be in the 60s both days. 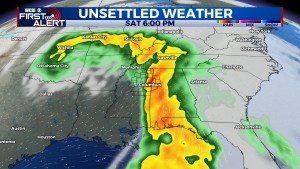 NEXT WEEK: After a chilly Monday, temperatures to look to rebound again by Tuesday and Wednesday. We’ll be watching a system rolling into the Southeast by Nov 30/Dec 1 for potential storms.

Unseasonably warm and humid, rain at times this week