Washington — Republican Congressman John Ratcliffe told a Senate panel probing his qualifications to serve as director of national intelligence (DNI) on Tuesday that he would deliver “objective and timely” intelligence to senior policymakers and to ensure that it was “collected, analyzed and reported without bias, prejudice or political influence.”

“If confirmed as DNI, one of the things that I’ve made clear to everyone is that I will deliver the unvarnished truth. It won’t be shaded for anyone,” Ratcliffe said at his confirmation hearing before the Senate Select Committee on Intelligence. “What anyone wants the intelligence to reflect won’t impact the intelligence that I deliver.”

Senators of both parties observing strict social distancing guidelines questioned Ratcliffe repeatedly about his ability to be an impartial custodian of U.S. intelligence products and pressed him for commitments to deliver truthful assessments, even if it meant displeasing the president or endangering his job.

At nearly each turn, Ratcliffe said his loyalty would be “to the Constitution” and the rule of law. He told the panel he did not believe the intelligence community had, as Mr. Trump said when he first nominated Ratcliffe in August, “run amok,” or that it needed to be “reined in.”

If confirmed as expected, Ratcliffe would replace Acting DNI Richard Grenell, whose relationship with congressional overseers and members of the press quickly soured after he assumed the position in February. Grenell’s combative style and a series of personnel moves drew criticism from former intelligence officers and lawmakers on Capitol Hill.

In his opening statement, Senator Mark Warner, the committee’s Democratic vice chairman, addressed the contrast explicitly. “Some have suggested that your main qualification for confirmation to this post is that you are not Ambassador Grenell,” Warner said. “But frankly, that is not enough.”

“Before we put the Senate’s stamp of approval and confirm a nominee to this critical position, senators must demand the qualities that the Senate specified when it passed the law creating the ODNI,” said Warner, who has written recently of his concerns about intelligence politicization in the Trump administration.

Mr. Trump first selected Ratcliffe for the role as DNI last August, but the Texas congressman soon withdrew his name from consideration, in part because of media scrutiny of his qualifications, some of which appeared to be overstated. Questions about his suitability for the job arose again on Tuesday, and some of his responses to those and other questions prompted frustrated reactions from Democrats who criticized him for being evasive or equivocal.

Ratcliffe said he had “no reason to dispute” the bipartisan findings but added that he felt similarly about the report issued by Republicans on the House Intelligence Committee, which faulted the “analytic tradecraft” underlying the conclusion on Moscow’s preferences.

In several instances, Ratcliffe sidestepped or declined to answer questions about recent Trump administration policy decisions that have proved controversial.

Asked about the firing by Mr. Trump of intelligence community inspector general Michael Atkinson, Ratcliffe said he didn’t have “enough information” to address the circumstances of Mr. Atkinson’s removal. On whether the whistleblower complaint that triggered the impeachment inquiry into Mr. Trump should have been provided to Congress, Ratcliffe said, “That’s a legal question that I don’t know the answer to.”

Asked whether he believed there is a so-called “deep state” within the intelligence community, as Mr. Trump has said, Ratcliffe told the panel, “I don’t know what that means.”

Asked whether the U.S. had made progress in reducing North Korea’s nuclear development, Ratcliffe responded, “I can’t address whether or not we’ve made progress,” citing information to which he might not be privy. He said he was “not sure” whether Iran was in compliance with the nuclear accord from which Mr. Trump withdrew the United States in 2018. 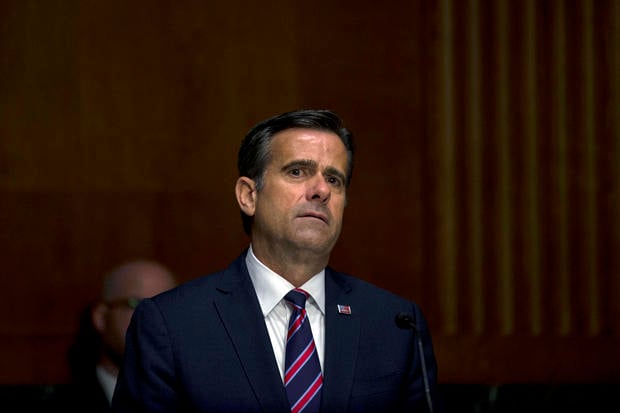 Representative John Ratcliffe testifies before the Senate Select Committee on Intelligence on Capitol Hill on Tuesday, May 5, 2020. Gabriella Demczuk / AP

Ratcliffe did make some affirmative commitments. He told the committee he would, if confirmed, work to “expeditiously” review and release the fifth installment of its three-year investigation into Russia’s 2016 election interference, and that he would appear publicly for a hearing on worldwide threats. The typically annual hearing, which features intelligence community leadership and covers top national security challenges, has not yet been scheduled in 2020.

The Texas congressman also said he would ensure that the intelligence community would remain “laser-focused” on determining the origins and early spread of the COVID-19 pandemic. He told the senators he had not seen any intelligence that would give him “high confidence” that the novel coronavirus originated in a lab in Wuhan, China — as Mr. Trump has suggested is the likely scenario — nor had he seen intelligence indicating the virus spread from a wet market.

Ratcliffe, a current member of the House Intelligence Committee, said it “has been a while” since he received a classified briefing, given the distancing measures imposed on Congress during the pandemic.

He called China “the greatest threat actor right now” and cited Beijing’s handling of the coronavirus outbreak, the race for supremacy in 5G technology and the Chinese Communist Party’s ambitions to supplant the U.S. as a global power as reasons why U.S. intelligence and investment priorities might “need to rebalance.”

Republican Chairman Richard Burr said after the hearing that he was satisfied by Ratcliffe’s performance. “I think he did a very successful job,” Burr said.

“It’s my intent to run this nomination as quickly through the committee as — possibly next week — and then hopefully work with the majority leader to get to the floor quickly so we can have a permanent DNI in place,” he added.