“Victory Gardens” for the war against COVID-19

This week the flowers at Roger’s Gardens in Newport Beach, California are in full, dazzling bloom. It’s as if to remind us that, even in the middle of our upended lives, spring somehow arrived on time.

But these days, only the bees seem to be interested in flowers. Right now, nurseries like this one across the country are selling out of vegetables.

When asked what customers are buying, Vanderhoff replied, “Things that relate to food. They don’t want to go out in public. But they also want the safety and security of nutritious food. And no better way to do that than to grow your own. Nothing’s better than going out to your garden and picking a tomato off the vine.”

And now, it seems gardening how-to videos are sprouting up everywhere.

Grow-it-yourself food is suddenly just the thing. Roger’s Gardens said seed sales have doubled, maybe even tripled, with tomato plants going at the rate of 800 a day.

What’s not so surprising, and certainly not new, is the notion of growing your own food when times get tough.

It all started back in 1917, when the U.S. government called on people to grow “war gardens” to free up food for soldiers fighting overseas in World War I.  And by the 1940s, same idea, different name: the “Victory Garden.”

And grow they did, in every available patch of land, even in the shadow of New York’s Chrysler Building. All told, an estimated 20 million World War II Victory Gardens produced nearly 40 percent of the nation’s fruits and vegetables.

The goals today aren’t quite as ambitious, but having a home garden still beats another trip to the grocery store.

Kristina Nylander is a pediatrician who thought planting veggies might get her two daughters to eat more of them.  Smith asked her, “Are you guys spending more time out here in the garden?”

“We definitely have a lot more time to be in the garden!” Nylander replied.

But in the end, it’s not just about the food. With all the watering and the weeding, your own COVID-19 Victory Garden can produce what might be the most valuable commodity of all these days:  escape.

Smith asked Roger’s Gardens’ Ron Vanderhoff, “It sounds like in this time of so much negative news, this could be one of the little positives to come out of it?”

“We wanna be a happy place where we’re providing food and a little bit of distraction,” he replied. “But we also want a person’s garden to be their happy place where they can do the same. So yeah, happy places are really important right now.” 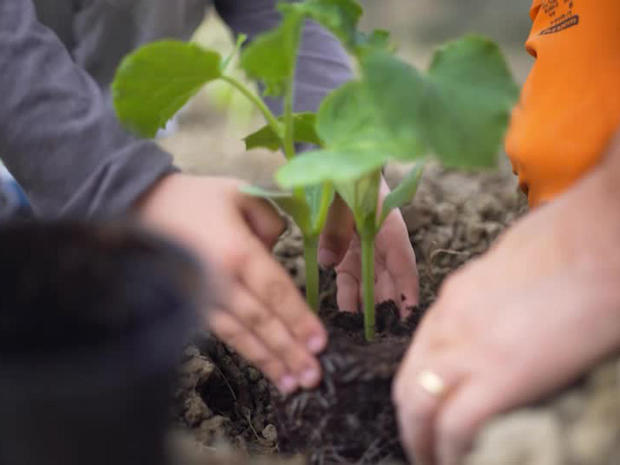