Jackson Chastain,
COLUMBUS – SUMMARY: A second cold front on Friday brings down lows into the teens, but high pressure and clear skies lead the way for some resurgence later in the week. No rain chance until the next Tuesday also means the warming trend will be aided by dry skies. Highs could be as warm as 60 by Sunday. 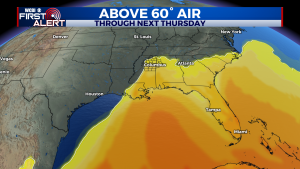 THURSDAY: Significant improvement in temperature is on the way as clear skies allow the sun to warm the air up. Highs reach into the upper 50s and lows reach the low 30s. Partly cloudy skies accompany with no rain chance expected.
FRIDAY: Friday’s cold front may be one of the more robust of the season as lows plummet into the teens overnight. Highs take a hit as well with the warmest temperatures only reaching into the mid 40s. The positive note for this scenario is that no rain chance is expected to accompany Friday’s front.

REST OF THE WEEK: Despite the rather chilly conditions, a high pressure system setting up over the region over the weekend will boost the rate of temperature increase and get us back into the 60s within a few days. Some clouds and rain do return at the start of next week, although you can still expect highs to remain around 60. Lows however, will be below freezing until about Sunday, as the clear skies also allow for rapid temperature drops overnight. 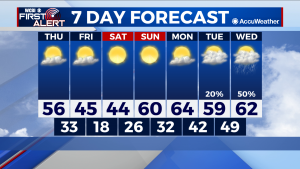