Washington — Eight more witnesses are scheduled to publicly testify in the impeachment inquiry against President Trump.

Next week’s hearings will unfold over the course of three days, from Tuesday to Thursday. There will be two hearings each on Tuesday and Wednesday, and one on Thursday.

House Republicans requested a list of witnesses for the public hearings, but at least two of them are unlikely to win Democrats’ approval: the whistleblower, and Hunter Biden, the son of former Vice President Joe Biden who served on the board of a Ukrainian energy company. The whistleblower has offered to answer Republicans’ questions in writing to protect his or her identity, but Republicans have insisted on public testimony.

In response to the GOP requests, House Intelligence Chairman Adam Schiff said, “This inquiry is not, and will not serve, however, as a vehicle to undertake the same sham investigations into the Bidens or 2016.”

The question at the center of the probe is whether Mr. Trump placed his political interests above national security by withholding U.S. aid to Ukraine and a coveted White House visit to pressure the country to launch investigations that could have benefitted his 2020 reelection campaign. It is illegal to seek or accept foreign assistance in U.S. elections.

The transcripts of most of the witnesses’ closed-door testimony were released earlier this month. Here’s a brief rundown of what to keep in mind about each witness, and when they’re set to appear:

Lieutenant Colonel Alexander Vindman will be the first witness to testify who was on the line for Mr. Trump’s July 25 phone call with the president of Ukraine, Volodymyr Zelensky, which prompted the initial whistleblower complaint. A Defense Department employee, he is currently the director for European affairs on the National Security Council (NSC).

“His testimony is important to address the Republicans’ mocking critique of the lack of firsthand knowledge from Taylor and Kent,” says CBS News Legal Analyst Kimberly Wehle.

He was so alarmed by the July 25 call that he reported his concerns to the top lawyer in the NSC, according to closed-door testimony he gave last month. He told lawmakers he “did not think it was proper” for the president to insist that Zelensky investigate Joe and Hunter Biden because “it would likely be interpreted as a partisan play, which would … undermine U.S. national security.” Joe Biden is one of the leading contenders for the Democratic presidential nomination.

Vindman also said the official summary of the call was missing portions of what Mr. Trump said about the Bidens.

Vindman also testified about a pivotal meeting he attended on July 10 with Ukrainian officials at the White House, in which Gordon Sondland, the U.S. ambassador to the European Union, pressed them to investigate the Bidens “in order to secure the meeting with the president.” Vindman said “the request to investigate the Bidens and his son had nothing to do with national security” and wouldn’t be pursued by the NSC.

The national security adviser at the time, John Bolton, was so mad that he cut the meeting short. 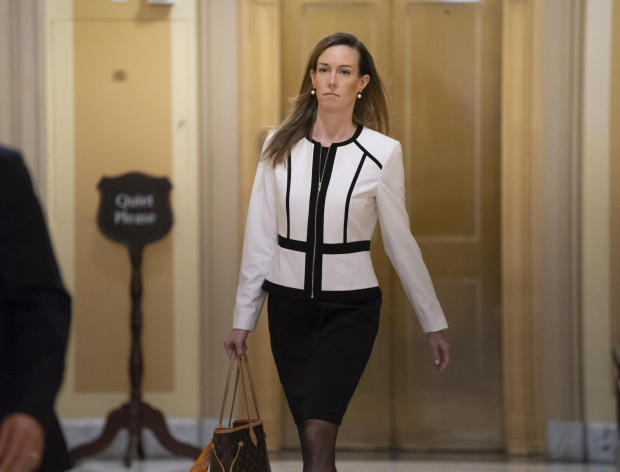 Jennifer Williams is Vice President Mike Pence’s special adviser on Europe and Russia. She was also on the July 25 call, but the House hasn’t released her opening statement or the transcript of her closed-door testimony on November 7. 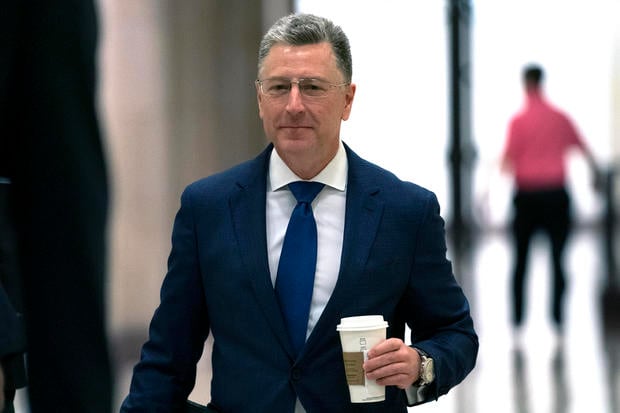 Kurt Volker, the former special representative to Ukraine, was a central figure in the efforts to pressure the foreign country to open investigations into the Bidens.

He largely defended the president’s actions in his closed-door testimony. He said the Ukrainians “never communicated a belief [to him] that there was a quid pro quo” and that he doesn’t think they were immediately aware of the suspended aid “so there was no leverage implied.”

But Volker’s text messages do reveal that Ukrainian officials pushed hard for a meeting at the White House between Mr. Trump and Zelensky. On July 25, the day of the now-infamous call, Volker implied in a text that Zelensky’s White House visit was conditioned upon whether he investigated the 2016 election.

“Heard from white house – assuming president Z convinces trump he will investigate / ‘get to the bottom of what happened’ in 2016 we will nail down date for visit to Washington,” he wrote.

Mr. Trump and his allies claim that Ukraine interfered in the 2016 election, even though the U.S. intelligence community has concluded it was Russia. The national security officials who already testified, including George Kent, said there is “no factual basis” for the Ukraine claim.

Volker said he resigned because he “could see this coming,” alluding to the impeachment inquiry, and wanted to “provide testimony … with as much candor and integrity as I possibly could.” 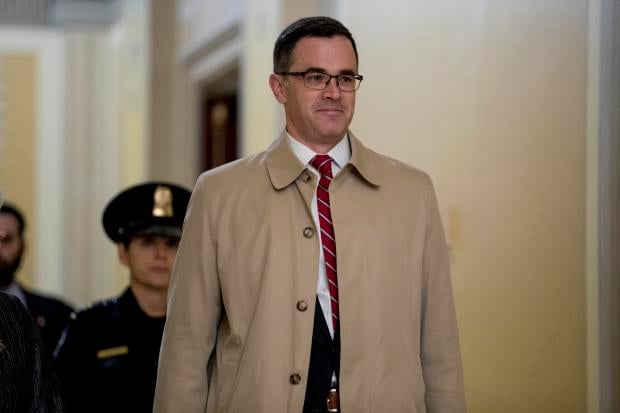 Tim Morrison is the NSC’s outgoing senior director of European and Russian affairs and a deputy assistant to the president. He was also on the July 25 call between Mr. Trump and Ukraine’s president.

So far, only his opening statement from his closed-door testimony has been released.

Although the July 25 phone call concerned him, he did not think “anything illegal was discussed.”

He did, however, corroborate the central allegation that Sondland told a high-ranking Ukrainian official that the release of military aid was contingent on an investigation into the Bidens. But he had a different recollection than Taylor about two details: who was asked to announce the investigation and where a conversation about it happened. 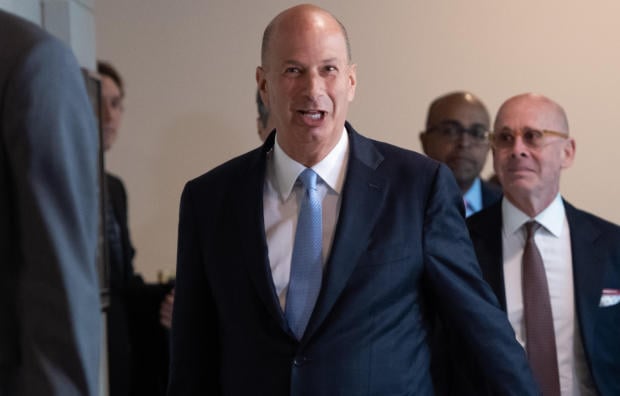 Gordon Sondland is the ambassador to the European Union and “the most important witness so far because he actually talked to Trump directly about this stuff,” says Wehle.

“His testimony could totally decimate the Trump defense that he was really worried about corruption versus self-interested foreign election meddling,” says Wehle.

In a shocking reversal earlier this month, Sondland revised his original closed-door testimony because he said reading other witnesses’ accounts “refreshed my recollection about conversations involving the suspension of U.S. aid.”

Sondland said he now remembers telling a top Ukrainian official that the release of delayed military aid was “likely” dependent on the foreign country announcing investigations that would benefit Mr. Trump politically.

Vindman accused him of asking Ukrainian officials to investigate the Bidens “in order to secure the meeting with the president.” Sondland testified that the meeting was contingent on Ukraine investigating 2016 election interference and Burisma, which employed Hunter Biden. 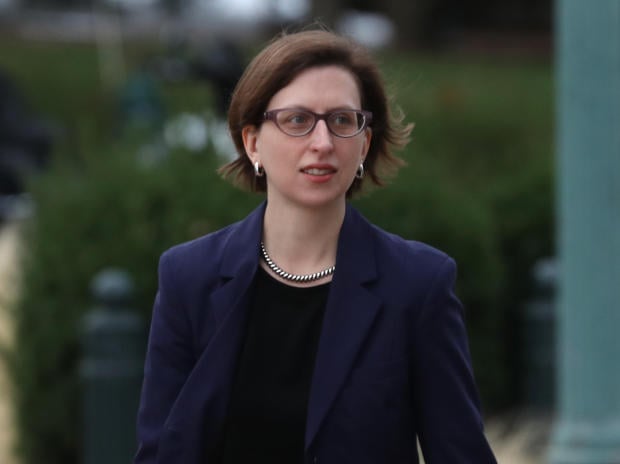 Laura Cooper for her closed-door testimony on October 30, 2019. Getty Images

Laura Cooper is the deputy assistant secretary of defense for Russia, Ukraine and Eurasia, and is responsible for overseeing U.S. military aid to Ukraine. She explained why providing aid is central for countering Russian aggression in eastern Ukraine.

“Security assistance is vital to helping the Ukrainians be able to defend themselves,” Cooper said in her closed-door testimony. “It is also within the U.S. national interest to provide security assistance to Ukraine.”

She said the funds “were held without explanation,” and that officials “began to raise concerns about how this could be done in a legal fashion.”

During a July 23 meeting, she learned from a representative for the Office of Management and Budget that the delay in aid “relates to the president’s concerns about corruption.” Mr. Trump has repeated unfounded claims that Biden and his son engaged in corrupt activities in Ukraine.

“So I walked away from the meeting on the 23rd thinking okay, we know that this is, you know, a larger issue,” Cooper testified. 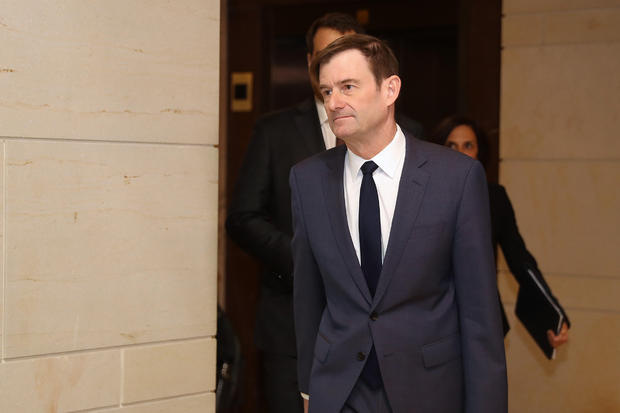 David Hale is the undersecretary of state for political affairs. Neither his opening statement nor the transcript of his November 6 closed-door testimony have been released. 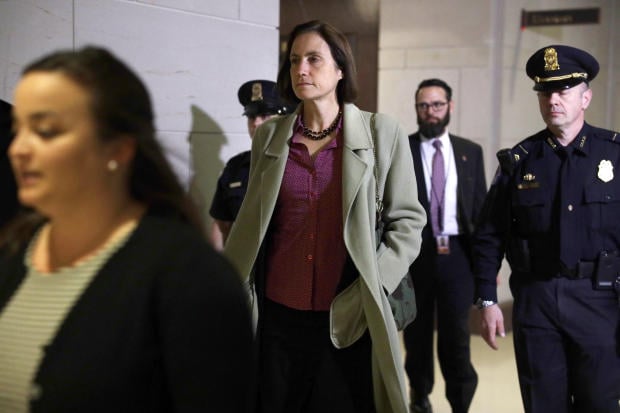 Hill was a senior director for Russia at the NSC, and she attended the July 10 White House meeting that was cut short by Bolton. Her testimony supports Vindman’s account, which is that Sondland told the Ukrainians that Zelensky would only receive an invitation to visit the White House if the foreign country opened an investigation into Mr. Trump’s rivals.

Bolton, infuriated, later directed Hill to “go and tell Eisenberg that I am not part of this drug deal that Sondland and Mulvaney are cooking up,” referring to John Eisenberg, the top NSC lawyer, and Mick Mulvaney, the acting White House chief of staff.

Hill said Mulvaney — who also leads the OMB — placed the hold on Ukraine’s aid. Mulvaney is refusing a subpoena to testify.

Both Bolton and Hill, as well as many other witnesses, worried about the role of Rudy Giuliani — Mr. Trump’s personal attorney — in Ukraine. Hill said she worried that “Ukraine was going to be played by Giuliani in some way as part of the campaign” and that “whatever it was that Mr. Giuliani was doing might not be legal.”

Wehle says it’s important to keep in mind that “there’s a laundry list of potential high-level witnesses who haven’t been called to testify but should — particularly if Republicans are serious about wanting firsthand knowledge.”