“CTM In Focus” is original reporting you’ll see only on “CBS This Morning,” exposing new information on issues that impact us all. Today: an inside look at the business of “location tracking.”

Thanks to an industry whistleblower, we are learning new details about how advertisers track our location through our phones – and how criminals could exploit that information.

“CBS This Morning” investigates the perfectly legal means by which advertisers track your location through your phone – and how criminals could exploit that information. CBS News

More than 1,000 apps reportedly collect location data, fueling an estimated $21 billion market. Location data typically comes from apps that log the movements of a person’s phone. Often people aren’t even aware the terms and conditions of these programs allow this information to be collected. The data is then sold to aggregators, who in turn sell it to advertisers looking for consumer trends.

We wanted to know who else gets ahold of that information.

Correspondent Tony Dokoupil spoke with a young tech worker whose job it was, he says, to buy daily location data on some 80 million Americans. But last year he quit the business, telling us the industry was failing to secure this sensitive information.

Afraid to be recognized on camera, he instead gave us a list of contacts so we could experience this secretive trade for ourselves.

Over the winter we began calling, emailing and texting our way into the location data business.

Six major data companies pitched us their product, unaware they were actually talking to a journalist.

In its sales pitch to us, one company promised to track people as often as every seven seconds – the “breadcrumbing effect.” Another said they could prove the quality of the data by tracking Dokoupil’s phone. Still another pledged to deliver people’s location “in real time.”

And all promised information on tens of millions of phone users, every day, including at home.

With a few emails and a phone call, “CBS This Morning” got a sample of data showing the movements of more than 1,500 phones over the course of a single day in one of the richest zip codes in America: Greenwich, Connecticut.

“The fact that you were able to get so much data on the American citizens that live up here is quite disturbing,” said Adam Scott Wandt, who studies “Big Data” at John Jay College of Criminal Justice in New York City. He helped us analyze the risks in a neighborhood like Greenwich. 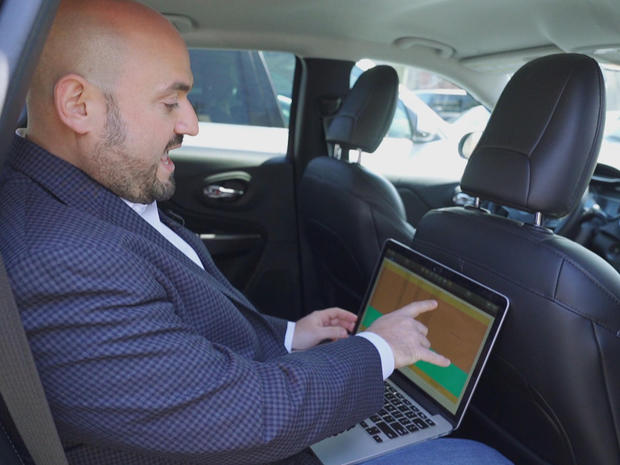 Adam Scott Wandt says it is easy for criminals to decipher the identities of people based on the location data obtained from their phones, and use that information to extort them. CBS News

No names or phone numbers were tied to the data, but it was easy to figure out to whom each phone belongs, based on where they spend their nights in Greenwich. It’s a place that invests heavily in privacy and security. But this data allowed us to go beyond all that, to follow as people moved through the community – and, in some larger homes, even track people as they move from room to room.

One phone pinged in the morning inside a $7 million mansion. The person then visited a country club, before heading downtown and returning home.

Another phone pinged someone’s location 231 times as he or she left home for an hour to run an errand.

Wandt explained how this could be valuable information to a potential criminal. “This is a very large sample set,” he said. “If you’re able to monitor your target – your mark – and you’re able to tell when they’re driving, when they’re not, perhaps when they’re having an affair with their mistress, it becomes much easier to take advantage of them and extort [them].”

No federal law limits the collection or use of this data, though there have been calls for regulation. In a Time magazine op-ed, Apple CEO Tim Cook called on the feds to “rein in data brokers” and allow “consumers to track the transactions that have bundled and sold their data.”

“CBS This Morning” wanted to find out how the people being tracked feel about all this. Of two homeowners we were able to reach, one told us he was alarmed, but didn’t want to appear on camera.

The other’s reaction caught us by surprise. Dokoupil spoke via intercom to one homeowner: “We want to make you aware that a phone in this household is being tracked in real time by a data location company, and we want to invite you to see the data and respond, if you’d like.”

A male voice replied, “Why would I care? I don’t think I want to do it. I’m not worried about it.”

Wandt said phones are “treasure troves” of information, and warns many Americans are overlooking the potential consequences of sharing their location data.

Dokoupil noted one man walking down the street: “If I followed him down the street, he’d be looking over his shoulder, and eventually he would ask me to stop. But his phone is following him right now, just the same way, and sending that data to some database, most likely.”

“It is,” said Wandt. “He is willfully ignoring the security risk and the privacy risks of carrying the phone for the convenience it provides him.”

“CBS This Morning” asked executives at eight different location data companies for an interview. All eight declined. Some told us they take privacy seriously and have safeguards in place, but none was willing to divulge which apps are selling this data.

You can adjust which apps are allowed to collect your location information within your phone’s settings menu.