Why angry residents blasted Pete Buttigieg at a town hall

As South Bend, Indiana Mayor Pete Buttigieg faced angry citizens during a contentious town hall meeting, he acknowledged “we’re not only here because of what happened Sunday.” Buttigieg was referring to the June 16 police shooting that has rocked the city and left 53-year-old resident Eric Logan dead.

“There is a lot beneath the surface when it comes to trust and legitimacy around policing and race in our city,” said Buttigieg, a 2020 Democratic presidential candidate.

Logan, an African American man, was shot by South Bend Police Sgt. Ryan O’Neill, a white police officer, drew outrage from community members at the Sunday meeting who called for transparency and accountability. According to the St. Joseph County Prosecutor’s Office, Logan was holding a knife as he approached an officer responding to a report of someone breaking into cars in an apartment building parking lot. The prosecutor’s office said Monday it has requested a special prosecutor be appointed to investigate the case, a decision Buttigieg applauded.

“Our community is in anguish and for all of us to come to terms with what happened, it is vital that the investigation be fair, thorough and impartial,” Buttigieg said in a statement.

But the shooting has also highlighted long-standing tensions between the police department and the city’s African American community. During Buttigieg’s term as mayor, the department has been at the center of a series of racially-charged policing controversies — some of which Buttigieg has been accused of mishandling —  and it was against that backdrop that frustrations boiled over on Sunday.

Buttigieg, who was first elected in 2011, faced backlash early in his tenure when he demoted the city’s first black police chief, Darryl Boykins, in 2012. The mayor said he demoted Boykins after learning that federal investigators were probing whether the police department had illegally recorded officers’ phone calls. According to The South Bend Tribune, the department’s then-communications director said she inadvertently discovered the recordings and that they contained white officers using racial slurs, including about Boykins.

Buttigieg reportedly said he hasn’t heard the tapes, citing the Federal Wiretap Act, and said he won’t release them until a judge determines they weren’t made illegally. But supporters of Boykins protested, reportedly picketing Buttigieg’s first State of the City address and calling for the tapes to be released.

The city settled a series of legal claims over the recordings, which included paying out a settlement to Boykins, who later retired. According to the settlement obtained by The South Bend Tribune, the parties agreed that there was no evidence to show that any racist words were used against Boykins. But the city’s common council has pushed for Buttigieg’s administration to release the tapes in a separate legal case that’s still pending.

In his book “Shortest Way Home,” Buttigieg writes the incident “affected my relationship with the African American community in particular for years to come.”

Buttigieg again drew fire for his handling of another high-profile police incident in 2013 involving then-police chief Ron Teachman, whom the mayor had appointed several months earlier. Teachman, who is white, was allegedly inside a city recreation center when a fight broke out outside. A police lieutenant who broke up the fight said Teachman stayed inside the recreation center despite the lieutenant’s call for help. Buttigieg reportedly declined to release a report by the Indiana State Police, who investigated, but said the incident didn’t merit discipline. The city’s public safety board president later resigned in protest, The South Bend Tribune reported.

“We’re black, so we automatically lose”

In July 2012, three South Bend officers reportedly handcuffed, punched and used a stun gun on a teen who was asleep in his home. They mistakenly believed was a domestic battery suspect, reports the South Bend Tribune. Four years later, a federal jury ruled that the officers violated 17-year-old Deshawn Franklin’s constitutional rights to unlawful search and seizure, but drew national outrage when they awarded the teen $18.

Peter Agostino, the lawyer who represented the officers, Aaron Knepper, Eric Mentz and Michael Stuk, told the South Bend Tribune in 2016 the low amount of the financial award was a matter of law — the family said they didn’t incur medical bills or other financial losses. But the family and many community members felt the judgment reinforced their sense that civil rights violations by officers against black people aren’t taken seriously. 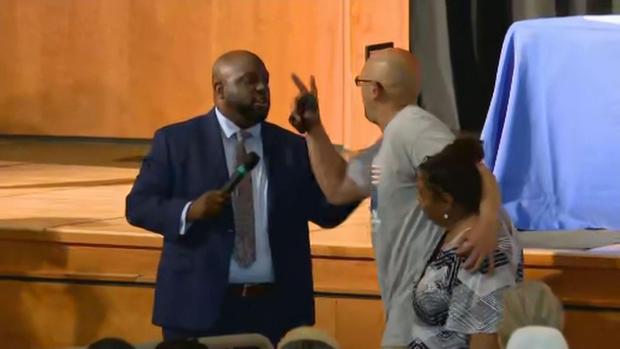 “We’re black, so we automatically lose,” Dan Franklin told The South Bend Tribune in 2016. “The boy should’ve got something — they punched him, shot him in the side with a Taser gun — but we had nobody on our side.”

Tensions over the incident were reignited Sunday at the town hall. Buttigieg addressed a desire in the community for answers and justice over the June 16 police shooting, but also referenced a need for resources, saying “I don’t think it’s a secret some families who are negatively impacted by interactions with law enforcement could use help with the costs of paying for things.” He suggested the community might be able to find ways to assist.

But the comment was met with outrage, with one man yelling, “$18!” in reference to the 2012 incident. Buttigieg has also faced calls to publicly apologize to the Franklin family.

Compounding the outrage over the Franklin case is that one of the officers involved, Aaron Knepper, has been the subject of a string of misconduct allegations but remains on the force, reports The South Bend Tribune. An attendee at the town hall shouted, “Fire Knepper!”

Later in 2012, Knepper and the other two officers were accused of bullying a 7-11 clerk, slashing his tires and pressuring him into swallowing a tablespoon of cinnamon as part of a dangerous stunt known as the “cinnamon challenge,” according to The South Bend Tribune. The clerk filed suit in May 2013, saying he vomited for several hours. The city suspended the officers without pay and settled with the clerk in 2016 for $8,000, according to records provided in a response to a public records request from the paper.

Knepper was named in another lawsuit in 2014 after he was involved in a traffic stop incident that led to the injury of former city golf champion Tom Stevens. Stevens alleged Knepper signaled for him to stop, but became aggressive when Stevens drove a block to his house instead of pulling over immediately.  The lawsuit said the officer used a stun gun on him and repeatedly struck him, The Associated Press reported at the time.

According to The South Bend Tribune, Stevens suffered a serious head injury during the struggle that left him hospitalized for days, but prosecutors cleared Knepper of criminal charges when they determined Stevens was injured when he fell backward onto a concrete driveway. The city agreed to pay Stevens $15,000 to resolve the suit.

Knepper was also cleared of wrongdoing in a 2016 altercation outside a bar with Notre Dame football player Devin Butler. Butler later pleaded guilty to a misdemeanor resisting charge and apologized to Knepper, whom he was accused of tackling after officers tried to separate him from two women who were fighting. Some witnesses, however, said police tackled Butler from behind without identifying themselves.

Buttigieg and police chief Scott Ruszkowski Sunday explained that determinations to fire or reprimand officers lie with the city’s public safety board, based on a recommendation by the police chief over whether the officers in question violated department policy. But Buttigieg said at the town hall he’s heard concerns over accountability and is open to improving the process for investigating officer misconduct.

Speaking on Sunday, Buttigieg said work has already been done to improve the relationship between the community and the police. He noted the institution of bias training and civil rights training, continuing community policing and transparency efforts and a push to raise disciplinary standards. But he admitted city officials have failed on two key fronts: efforts to diversity the police force and to successfully implement the use of body cameras.

Under Buttigieg, the police force has become less diverse, despite efforts to recruit minorities. And O’Neill’s body camera was turned off at the time of Logan’s shooting, something Buttigieg said has caused a community concern that he shares.

“As mayor of this city, I want to acknowledge those last two lines of effort — efforts to recruit more minority officers to the police department and efforts to introduce body cameras — have not succeeded,” Buttigieg said. “I accept responsibility for that.”

Citizens at times shouted him down, with one woman demanding Buttigieg reorganize the department to “get the racists off the streets.”

“I will say that if anyone who is on patrol is shown to be a racist, or to do something racist in a way that is substantiated, that is their last day on the street,” Buttigieg responded.

The town hall comes days before Buttigieg is scheduled to participate in the Democratic primary debates. Buttigieg, who has been on and off the campaign trail since the incident, said he is still planning to debate his fellow candidates later this week.