A horn shark has been safely returned to the San Antonio Aquarium on Mon., July 30, 2018.

A 16-inch-long horn shark has been safely returned Monday night to the San Antonio Aquarium after it was stolen over the weekend, CBS affiliate KENS-TV reports. Surveillance video from the facility showed three suspects scoping the facility out for more than an hour. Then one of them snatched a female horn shark, named Miss Helen, from its tide pool exhibit, according to the Leon Valley Police Department, and wrapped it in a blanket. The male suspect then put the animal in a stroller to disguise it as a baby for a clean getaway in a SUV in the parking lot.

Later, a man allegedly posted a picture online of a horn shark that included a caption that read “selling a horn shark, perfect for the next shark week. Alive and well just took out of tank for a quick pic.” 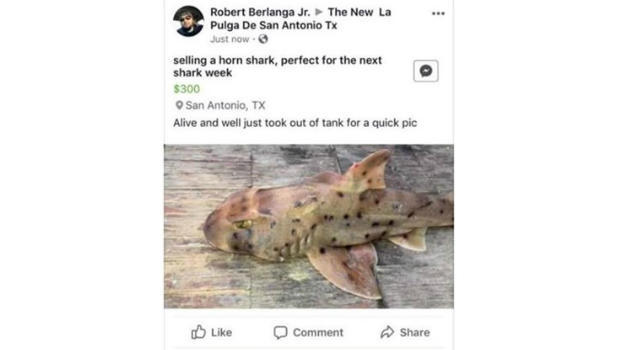 He was reportedly selling the sea creature for $300. It was unclear if the man who posted the image was linked to the incident at the aquarium. The post has since been deleted.

KENS-TV says that two people have confessed to stealing the shark.

Earlier, the aquarium posted about the incident on its Facebook page — including images of the suspect and the shark itself in hopes that it would spur interest and information from the public.

On Saturday, July 28th one of our employees reported seeing suspicious activity from three people around one of our…

Then Monday, the aquarium released video footage of the shark stealing operation.

This is a video of the suspects. This is linking to the earlier post about the Horn Shark that was stolen from the San Antonio Aquarium.

One employee said that she’s “overjoyed” to see Miss Helen back in her rightful home. She said the shark is less than 1 year old. The employee said she’s a “little fighter … survivor.”

“It’s a very small shark that is found in the Pacific Ocean. We don’t have any in the Gulf of Mexico. They are bottom dwelling. They actually do very well in captivity, so they are often found in public aquariums,” Texas Parks and Wildlife Science Director Michael Fisher told KENS-TV.