Our series, School Matters, features extended stories and investigations on education. In this installment, we’re looking at a lawsuit winding its way through the federal appeals process that questions whether access to literacy is a constitutional right. A federal judge in Michigan recently ruled it wasn’t when he dismissed a 2016 case. That case claimed students in some of Detroit’s lowest-performing schools were denied “access” to literacy due to poor management, discrimination and underfunding.

For years, Detroit public schools were under control of emergency managers, who were trying to lift the district out of debt.  But, this case has drawn national attention because of its wide-ranging implications, possibly leading to federal changes to the education system.

There is no escaping the alarming fact that performance at many Detroit public schools is sagging.

“I often have conversations with my students, they would say, you know, ‘We feel like people don’t care about us,'” Rodney Fresh told CBS News’ Michelle Miller. “I mean, we have a book where Bill Clinton is the president. And it was actually the same book I used when I was in middle school.”

Although now relocated to another Detroit school, Fresh used to teach at one of the schools named in a class action lawsuit that accuses the state of “systemic, persistent and deliberate failure to deliver instruction and tools essential for access to literacy – which serve almost exclusively low-income children of color.”

“It wasn’t just like one or two students,” Fresh said. “Forty to 50 students that read anywhere between a first grade and sixth grade level in the 10th or 12th grade.”

Superintendent of Detroit public schools Nikolai Vitti, who was appointed just last year, is attempting an overhaul. He welcomes the lawsuit.

“Walking into a system that was not run appropriately gives me evidence that decisions were made not in the best interest of children,” said Vitti, who believes the policies in place were racist. 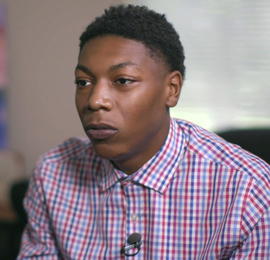 “I have and they are. Because the governance system that existed in Detroit would never, ever have been acceptable in any suburban district in this country, anywhere,” Vitti said.

Government figures suggest Detroit children are falling behind. Only 5 percent of the city’s 4th grade students can read at or above a proficient level. For Detroit’s eighth graders, that number rises to only 7 percent.

“As a student in kindergarten, for example, wasn’t even exposed to kindergarten standards,” Vitti said. “So, we’re setting children up for failure.”

Jamarria Hall says he was one of those children set up to fail. He is one of the original members of the plaintiff class.

“Coming from Detroit, they always say nine times out of 10 you’re barely going to graduate high school…You’re going to end up in jail, things of that nature…So I just don’t want to be a statistic,” Hall said.

Hall now lives in Tallahassee where he attends community college and hopes to transfer into Florida A&M University.

Hall said he sometimes feels “dumb” or not as smart as he needs to be. He said he’s probably just getting to a high school junior or senior level in terms of his reading level.

“But I know it’s not my fault. I know it’s jsut the school system I came from,” said Hall, who feels cheated. “Like we are 10 steps behind. Like we’re always trying to catch up.”

CBS News reached out to both Michigan Gov. Rick Snyder and the state’s board of education, for an interview request and comment. They told us they could not comment on pending litigation.

“CBS This Morning” is partnering with USA Today to feature extended stories and investigations on education. Go to USAToday.com to read their piece on Detroit students’ fight for their right literacy.