COLUMBUS, Mississippi (WCBI) – In its latest report, NOAA states 2021 was the fourth-warmest year on record for the United States.

With an average temperature of 54.5 degrees F, the United States clocked its 4th warmest year on record. This bests the 52 degree average by more than 2 degrees. 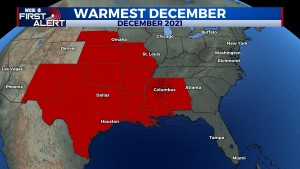 Mississippi and Alabama were among eight other states registering the warmest December on record. Many cities across the South experienced all-time record high temperatures on Christmas Day.

The month of December was also incredibly active for tornadoes, especially for the Mid-South region. 20 one-billion dollar disasters occurred throughout the year: tornadoes, hurricanes, damaging wind events, and wildfires to name a few.

Are there enough houses to go around?

Hot again Tuesday, much cooler Wednesday as rain moves in