A Russian cosmonaut, his Canadian co-pilot and a NASA flight engineer boarded their Soyuz spacecraft, undocked from the International Space Station and plunged back to Earth on Monday night, landing on the sunny steppe of Kazakhstan to close out an action-packed 204-day mission.

With commander Oleg Kononenko at the controls, flanked on the left by Canadian David Saint-Jacques and on the right by veteran Army helicopter pilot Anne McClain, the Soyuz MS-11/57S spacecraft separated from the station’s upper Poisk module at 7:25 p.m. EDT Monday, setting up landing three hours and 22 minutes later.

Welcome home @AstroAnnimal, @Astro_DavidS and Oleg Kononenko! The @Space_Station crew has returned home safely after 204 days in space & 3,264 orbits of Earth. Everyone at @NASA is grateful for your hard work! pic.twitter.com/BQMK9WxH8U

“It’s such a special place to live,” she said in a June 19 interview with CBS News. “We’re not up here visiting space, we’re up here living in space. One of my colleagues said it best the other day, you know, if you told me I was born here and everything on Earth was just a dream, I might almost start believing you. Because we are so at home up here. That is something so special.”

She added: “I think if I could have my friends and family visit, I might just stay forever.”

After backing a safe distance away from the space station, Kononenko monitored a four-minute 39-second deorbit rocket firing, starting at 9:55 p.m., that slowed the spacecraft by 286 mph, just enough to drop the far side of the orbit deep into the atmosphere.

Before plunging back into the discernible atmosphere at an altitude of about 62 miles, the Soyuz’s upper orbit module and its lower propulsion and power section were discarded to burn up in the atmosphere while the central crew module, the only one with a heat shield, continued along the planned trajectory.

Six minutes later, the crew cabin exited the region of maximum heating from atmospheric friction and deployed its parachutes to slow from a velocity of about 515 mph to a much more sedate 16 mph or so.

“The Soyuz ride home, we have heard lots about it, somewhere between (riding in) a washing machine and a roller coaster, three-and-a-half hours of the most exciting ride that we’ll probably have in our life,” McClain said. “Definitely looking forward to a once in a lifetime ride.”

And she clearly enjoyed the experience. When recovery crews pulled her through the top hatch of the charred descent module, McClain pumped her fists, smiled broadly and look remarkably fit after a voyage spanning spanning 203 days 15 hours and 16 minutes. That translates into 264 orbits and 86.4 million miles traveled since launch from the Baikonur Cosmodrome on Dec. 3.

McClain, Kononenko and Saint-Jacques were carried to nearby recliners for initial medical checks and satellite phone calls home to friends and family. All three appeared healthy and in good spirits. 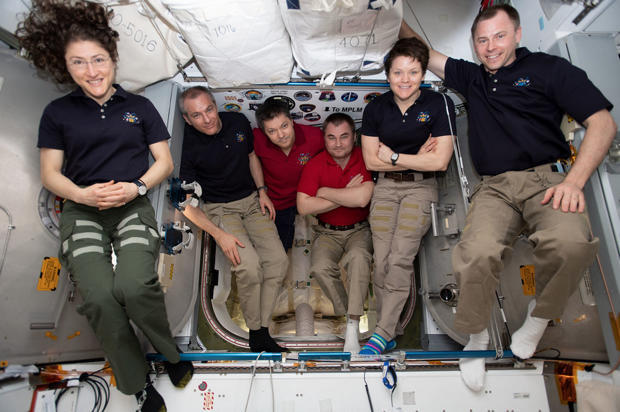 “Everything was quite nominal as expected,” Kononenko said of the entry and landing. speaking through a translator. “We experienced maximum G loads of four Gs. … As far as the weather is concerned, after we come back from space we’re happy to see any kind of weather!”

Kononenko’s time in space over four space flights now totals 737 days. McClain and Saint-Jacques logged 204 days in orbit during their first space flight. During their stay aboard the station, the crew welcomed six visiting vehicles — three cargo ships, a SpaceX Crew Dragon test vehicle, a Russian Progress and a Soyuz — and helped with their departures.

In addition, Kononenko carried out two spacewalks, pushing his total to five, McClain conducted another two and Saint-Jacques one.

All three crew members were to be flown by helicopter from the landing site to Karaganda. From there, McClain and Saint-Jacques will head back to the Johnson Space Center in Houston aboard a NASA jet while Kononenko is flown home to Star City near Moscow.

With the departure of Kononenko and company, the Expedition 60 crew of Ovchinin, Hague and Koch will have the station to themselves until July 20 — the 50th anniversary of the Apollo 11 moon landing — when the Soyuz MS-13/59S spacecraft takes off from Baikonur carrying Alexander Skvortsov, NASA astronaut Andrew Morgan and Italian veteran Luca Parmitano.

On Aug. 22, the expanded six-member crew will welcome an unpiloted Soyuz — MS-14/60S — to the lab complex for a 10-day stay. The spacecraft will be the first launched atop an upgraded Soyuz 2.1a booster after several flights carrying Progress cargo ships. Assuming the rocket performs as expected, the Soyuz 2.1a booster is expected to begin operational Soyuz flights next year.

On Sept. 25, another Soyuz — MS-15/61S — will carry station veteran Oleg Skripochka to the outpost, along with NASA’s Jessica Meir and Hazzaa Ali Almansoori, a guest cosmonaut representing United Arab Emirates. That will be the final planned flight of the older Soyuz FG booster and the final planned use of Yuri Gagarin’s launch pad at Baikonur. 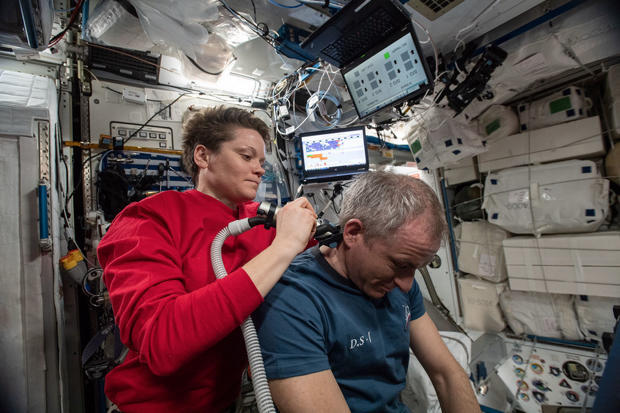 At touchdown, Koch will have logged 328 days aloft — a single-flight record for a U.S. female — just 12 days shy of the U.S. single flight record of 340 days set by Scott Kelly.

“I like to think that a record isn’t how many days you spend up here, it’s what you do with each of those days,” she told CBS News. “So when you look at it that way, it actually isn’t a daunting thing, it’s a privilege to be a part of. It’s a reminder to me to bring my best to every day I have here.”

She said she hopes her record is “exceeded as soon as possible after my time, because that means we’re continuing to push the barriers.”

Koch will take Morgan’s seat for her ride home aboard the Soyuz MS-13/59S spacecraft, along with Skvortsov and Parmitano. Morgan remains aloft for an extended mission of his own, joining Skripochka and Meir for the trip back to Earth April 1 aboard the Soyuz MS-15/61S vehicle. His flight will total 256 days.