A new museum for Lady Liberty

The irony is stunning: At a time when the President of the United States appears at campaign-style rallies ranting against immigrants, on Thursday the new $100 million Statue of Liberty Museum opens on Liberty Island in New York Harbor.

Its centerpiece: the original torch Lady Liberty carried, replaced in the 1980s because it leaked. If a visitor stands in the right spot, they can get a perfect view of the torch, and of the Statue of Liberty and American flag outside the window.

The centerpiece of the new Statue of Liberty Museum, on Liberty Island in New York Harbor, is the original torch Lady Liberty carried, which was replaced in the 1980s because it leaked. CBS News

The dueling messages couldn’t be more contradictory. “Immigration has been a controversial subject, not just now,” said Stephen Briganti, president and CEO of the Statue of Liberty-Ellis Island Foundation. “You go back through our history, it’s been controversial. I think it’s interesting how this country has remained a symbol of welcome at the same time that we didn’t really always welcome people.”

Briganti said the purpose of the new museum is to tell the story of the development of the statue back in the 1800s, as well as the story of how it came to be seen as the American symbol – a symbol of good, of inclusion, of liberty.

Even when that story, to some, is myth.

“Liberty Enlightening the World” is the statue’s official name. Designed by Frédéric Auguste Bartholdi, she was a gift from the people of France to the United States. It was the Americans’ responsibility to build the pedestal. 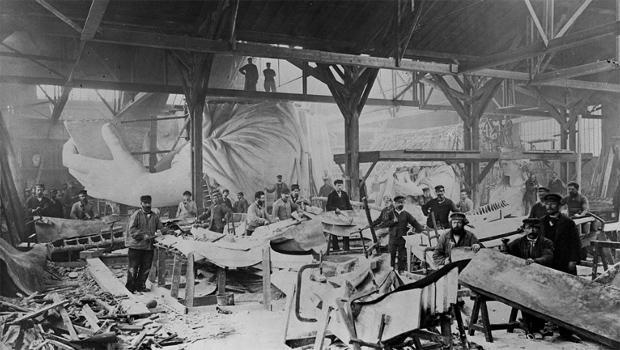 A view of Bartholdi’s Parisian warehouse workshop. Library of Congress

Unfortunately, fundraising fell $100,000 short, until Joseph Pulitzer, the owner of the New York World (and himself an immigrant from Hungary) stepped in with a bright idea: “If you gave any money, your name appeared in the newspaper,” said Briganti. “I thought it was pretty brilliant, ’cause you bought the newspaper to see your name!”

It took just five months to raise the money. On the day the pedestal was completed, workmen sprinkled coins into the wet mortar to recognize the 120,000 gifts, most less than a dollar.

The museum contains a photo of Bartholdi’s actual studio; in it, the statue as a collection of colossal body parts. Also featured: A full-sized replica, built in the 1980s, of a foot of the Statue of Liberty. The copper playing, like the original, is remarkably thin, not much thicker than a penny. 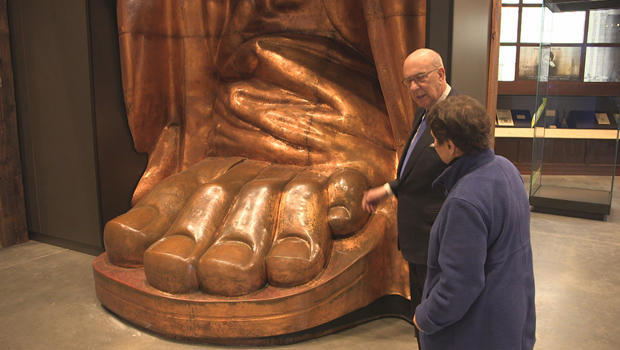 Under the statue’s thin copper skin: an iron skeleton, designed by Gustave Eiffel, who later designed the Eiffel Tower.

On October 28, 1886, the day Lady Liberty was dedicated, a million people came out in the rain. New York held its first-ever ticker tape parade to celebrate her.

From foundation to flame, the whole monument is 305 feet high. The statue itself is about half that. She weighs 225 tons. 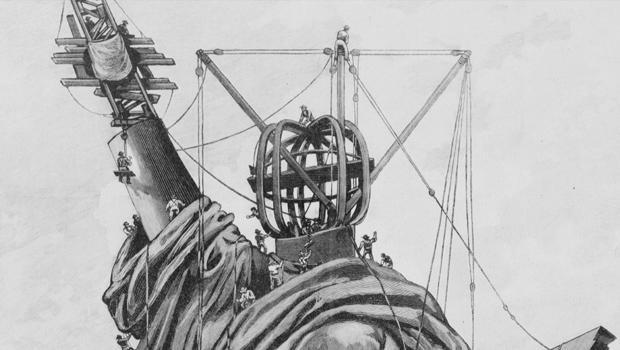 An illustration showing the statue’s components being assembled onto a skeleton designed by Gustave Eiffel. CBS News

By the time the famous Emma Lazarus poem (“Give me your tired, your poor, your huddled masses…”) was inscribed on her base in 1903, the statue had already become a beacon for immigrants. Songwriter Irving Berlin, an immigrant from Russia, would put the words to music.

Briganti said, “It was the first big thing they saw as they arrived in New York Harbor. They would write home to people and say, ‘When you see the Statue of Liberty, you’re there. You’re in America.'”

Dave Luchsinger was the last National Park Service superintendent to live on Liberty Island. His house was destroyed during Superstorm Sandy in 2012, making way for the new museum. He’s retired now, but his reverence for the statue remains. Being superintendent there, he said, was “the honor of my life, the highlight of my career. 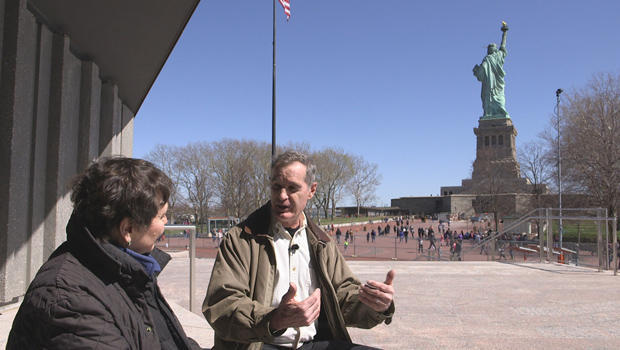 “I never cease to get more and more inspired by her, actually. Every time I see her, she turns different colors. There are times where she actually looks like she’s gonna step right off the pedestal and say hello to you.”

She cast her spell on the workers who built the museum, including their boss, Doug Phelps. “We’re doing something for our country,” Phelps said.

Correspondent Martha Teichner asked, “What does the statue mean to you?”

“It’s liberty,” he said. “It means freedom. It means our country.”

More than four million people visit the Statue of Liberty every year, all coming to bask in her promise.

In the new museum – like the statue itself, paid for entirely from private donations – they are asked to consider what liberty is, and to be her promise. 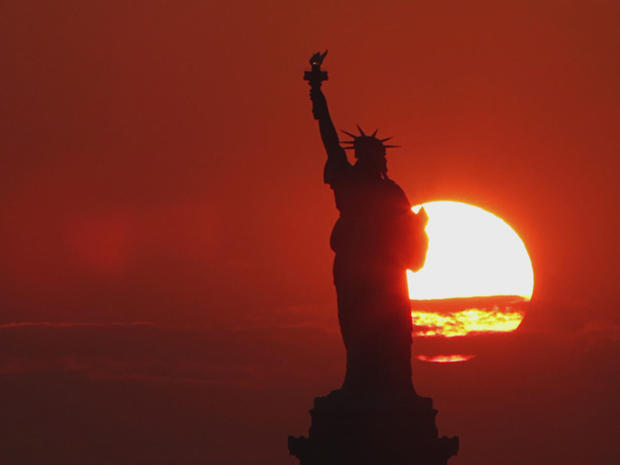 From 1986: Immigrants on the Statue of Liberty