A small urban farm has a big impact on young lives

This is paid content. It was written and produced by CBS News Digital’s branded content studio in collaboration with the sponsor.

Bright and early one Saturday morning in downtown Austin, Texas, young people hustle to set up a farmers market stand piled high with leafy greens and freshly harvested vegetables. Just a short drive away on a three-acre farm, more youth are preparing to lead a group of adults through a day of planting, weeding, shoveling and learning. This is what Urban Roots is all about.

“One of the most powerful parts of our work is we can engage young people and adults from all walks of life to work across from each other,” explained Max Elliott, co-founder and executive director of Urban Roots. “They’re going to have some differences: They might come from different parts of town, they might have different ages, they might look different. But together we’re working toward a shared goal of nourishing the community.”

Elliott started Urban Roots back in 2008. The idea was to create a youth development organization that provides paid internships for young people to grow food for the community. The nonprofit’s mission is two-fold — use food and farming to transform the lives of kids in the program, while also inspiring and engaging the community around them.

Elliott said the farm now serves more than 110 youth per year and grows 25,000 pounds of produce. Urban Roots donates 40% of the crop to local soup kitchens and food pantries and sells the rest at farmers markets. Participants also do volunteer work, including delivering food with organizations like Meals on Wheels.

In addition to helping young people develop leadership and entrepreneurship skills, Elliott also sees the farm as a refuge for them. The teens can leave their city lives at home — the usual mix of college applications, social media dramas and other pressures — and connect with a different part of themselves in fields and pastures. 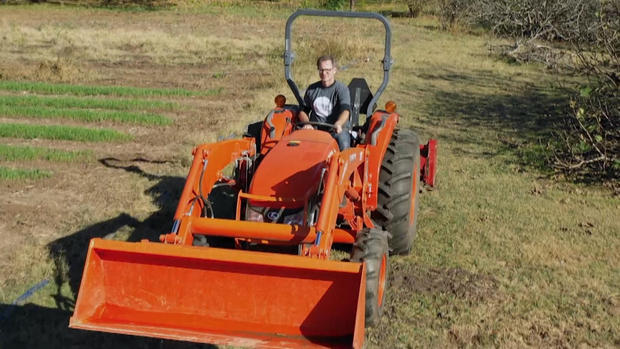 “The landscape transforms through them,” Elliott said. “So as the plants are growing, young people are growing as well.”

Lizandro Becerra is a high school senior who plans to attend college and study architecture. He said spending long hours in the outdoors, sweating and working hard, didn’t sound appealing at first. But once he got on the farm, things changed.

“Before the internship, I was very shy, and as a good leader that’s not really a thing,” Becerra said with an infectious smile. “So I’ve definitely jumped out of my box, I’ve definitely become the person I wanted to be when it comes to being a leader.” 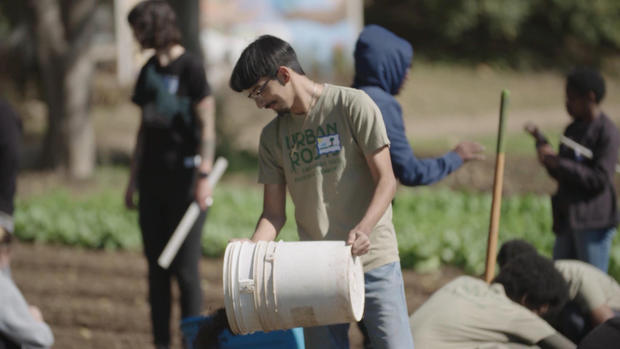 One of Urban Roots’ youth leaders, Lizandro Becerra, plans to attend college to study architecture. “I’ve definitely jumped out of my box,” he said of the city farming internship’s challenges. “I’ve definitely become the person I wanted to be when it comes to being a leader.” CBS News

Another teen, Estelle Powell, led the “closing circle” that concludes a volunteer day with adults. She was poised in a situation many young people would shy away from.

“I found such a refuge at the farm from school and work and everything else,” Powell said. “I’m excited every week to come here. It’s just really peaceful.”

For Elliott, the farm is also a place of peace. He said it helped give him a sense of purpose and feel like a part of something bigger. And the farm itself may be growing soon, too. Urban Roots is in the early stages of starting a second, larger farm as part of a partnership with the city of Austin. Once the facility is complete, Elliott expects it to have a kitchen to teach culinary skills, outdoor classrooms and a bigger overall public footprint to help nourish more communities in central Texas.

“I love the word ‘nourish’ because it means so much,” Elliott said. “Not only are we providing healthy, affordable food for those in need, but we’re also an environment where we’re providing a lot of healing. Nourishment is not only physical, but it’s spiritual and social as well.”