Doctors Without Borders’ Sergio Martin has worked in war-torn countries for years, but he never imagined he would witness so much violence in the areas of Mexico where the U.S. government has been returning tens of thousands of asylum seekers in recent months.

“I was not expecting the level of violence and the level of need I can see in Mexico. In fact, I have been working in war zones in Congo, in Africa, and the Middle East,” Martin, who now heads the Doctors Without Borders mission in Mexico, told “Face the Nation” moderator Margaret Brennan.

“The level of violence some of these people are suffering can be compared, that’s clear, with some war zones in Africa,” he added, referring to migrants sent back under the Trump administration’s controversial “Remain in Mexico” policy.

Since December 2018, U.S. officials have required more than 37,000 migrants to wait in Mexico while their asylum cases are processed in the U.S. The policy, officially called the Migrant Protection Protocols (MPP), has drawn scathing criticism from immigrants advocates and even some of the asylum officers interviewing migrants placed in the program.

Young asylum-seekers play close to the International Bridge near a section where a father and daughter drowned attempting to cross into the United States on June 26, 2019 in Matamoros, Tamaulipas. Oscar Alberto Martinez and his 23-month-old daughter, Angie Valeria, had migrated from El Salvador and were seeking political asylum in the United States when they died on Monday June 24. Veronica G. Cardenas / Getty Images

A CBS News series found the program often places vulnerable migrants, including families with small children and single women, in precarious situations during their prolonged stays in dangerous Mexican border cities, where the chances of finding and securing American lawyers are slim. Attorneys, journalists and advocacy groups have already documented cases of asylum seekers in the program being kidnapped and extorted in Mexico.

In addition to the “Remain in Mexico” program, U.S. officials have also implemented a lesser-known policy known as “metering” to limit the number of people who can seek asylum at highly transited ports of entry, effectively ensuring that tens of thousands of migrants are required to wait in Mexico, either for the court date or to seek asylum for the first time.

Martin said these policies are punishing desperate migrants, who he said have already suffered enough in their home countries.

“It’s not a light decision,” he said of the decision hundreds of thousands of Central Americans and people from other countries like Cuba and Venezuela have made over the past months to undertake an often perilous journey to the U.S.-Mexico border. “It’s not a decision you will take overnight. So for them it’s really a very hard step.” 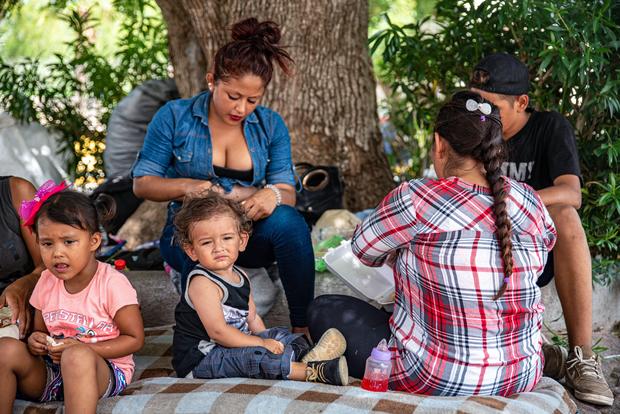 Would-be asylum seekers prepare to eat near the Mexican border in Matamoros, Tamaulipas. Migrants who are waiting for their chance to claim asylum have set up camp with dozens of other migrants, forming a small community just outside the Mexican border. Many are on a list kept by the Mexican government who keep track of the asylum seekers and are taken over in small groups, this is to keep them all from crossing all at once.  Sergio Flores / AFP/Getty Images

Earlier in the summer, Martin noted, the U.S. expanded the “Remain in Mexico” policy to the Texas border sectors in Laredo and Brownsville and started returning asylum seekers to Tamaulipas, one of five Mexican states the State Department warns Americans travelers not to visit because of widespread crime and the risk of being kidnapped.

“It’s the same level as Afghanistan or other war zones,” Martin said, referring to the level 4 travel warning the State Department has issued for Tamaulipas.

Martin said the policy will also likely prompt families and other migrants to try to evade authorities and cross the U.S.-Mexico border illegally at remote areas where the journey can prove risky and even deadly. In late July, a 20-year-old Guatemalan woman drowned trying to re-enter the U.S. after she had been sent to Mexico under the MPP program.

For Martin, there’s a clear irony in the name of the policy.

“Calling it (the) Migrant Protection Protocols while you’re putting people in these risky areas? I mean it’s not humane. That’s clear,” he said.