PHOENIX — Thousands of teachers in Arizona and Colorado descended upon their respective Capitols for a second day in a growing educator uprising. Educators in both states want more classroom resources and have received offers either for increased school funding or pay, but they say the money isn’t guaranteed and the efforts don’t go far enough.

The walkouts are the latest in demonstrations that spread from West Virginia, Oklahoma and Kentucky.

On the first day of the historic statewide walkout in Arizona, around 50,000 educators and their supporters marched Thursday through downtown Phoenix in nearly 100-degree heat and swarmed the Capitol grounds.

Teachers said they won’t return to work until they feel their message has been heard, CBS News correspondent Jamie Yuccas reports. Alexis Aguirre, a second-grade teacher in Phoenix, said living paycheck to paycheck has forced her to consider other careers.

“It’s really heartbreaking to have to choose between our families and the professions that we love, but it doesn’t make financial sense to stay in the classroom,” Aguirre told Yuccas.

Arizona teachers march through downtown Phoenix on their way to the State Capitol as part of a rally for the #REDforED movement on April 26, 2018 in Phoenix, Arizona.

In much cooler Colorado, several thousand educators rallied around the Capitol, with many using personal time to attend two days of protests expected to draw as many as 10,000 demonstrators. The tone Friday was more festive than the day before. A jazz band warmed up the crowd by leading them in songs like “Marching on Freedom Land.” Teachers danced along, while others kept some beach balls bouncing over the crowd at Civic Center Park. The band then joined teachers in a march to the Capitol, as drivers honked their car horns and police stopped traffic to let them cross the street.

Lawmakers in Colorado have agreed to give schools their largest budget increase since the Great Recession. But teachers said Colorado has a long way to go to recover lost ground during the downturn and stick to the provisions of a voter-approved amendment aimed at increasing school funding and countering the effect of the state’s strict tax-and-spending limits.

Friday’s protests come as Republican leaders of the House and Senate continue negotiating with Arizona’s Republican governor, Doug Ducey, on a budget plan he’s pushing to give teachers a 20 percent raise by 2020. The Legislature has adjourned until Monday.

Teachers want the 20 percent raise but also have four other demands, including raises for support staff, yearly teacher raises, a restoration of school funding to 2008 levels and no new tax cuts until the state per-pupil funding reaches the national average.

Mesa English teacher Kelly Grant said that Ducey is not listening and teachers want him to sit down with the movement’s leaders to work out a deal.

More than 840,000 students were out of school as a result of Thursday’s walkouts, according to figures from The Arizona Republic. 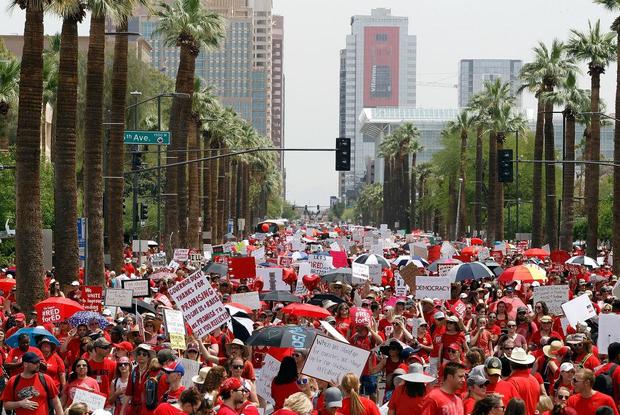 Arizona teachers march through downtown Phoenix on their way to the State Capitol on April 26, 2018 in Phoenix, Arizona.

Organizers said they haven’t decided how long their walkout will last.

“We want to make sure we can gauge the membership about what they want to do,” said Derek Harris, one of the organizers of grass-roots group Arizona Educators United.

One major Phoenix-area district, Chandler Unified, said Thursday it planned to reopen schools Monday but reversed itself Friday, saying schools would remain closed “based on the number of teachers who have reported their absence for Monday.”