Battleground Tracker: Sanders tied with Biden and Buttigieg for lead in Iowa

The New Year opens with Bernie Sanders in his best standing yet against the field in Iowa and New Hampshire. He’s in a first-place tie with Joe Biden and Pete Buttigieg in Iowa. All three are at 23%, and each would get a similar number of delegates out of the caucuses if they were to take place today, according to the CBS News Battleground Tracker. Sanders also now has a narrow edge in New Hampshire, with a two-point lead over Biden.

Meanwhile, Elizabeth Warren has slipped in New Hampshire since November, as liberal voters have moved toward Sanders instead. However, she’s still in position to get delegates there.

There’s at least one thing keeping this race in flux: If Democrats’ New Year’s resolution is to beat President Trump, none of the candidates has yet convinced a majority he or she can do it.

Candidates receiving 3% or less support in the poll are not pictured. 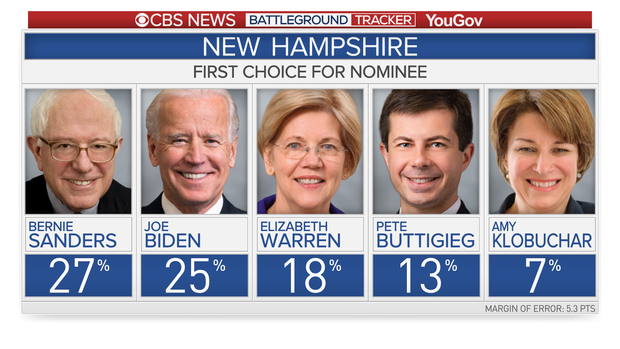 Candidates receiving 3% or less support in the poll are not pictured.

Apart from recent gains in New Hampshire, Sanders’ support is still best characterized by its steadiness and strength compared to other candidates who have seen more volatility. Nearly half (47%) of his New Hampshire voters say they’ve definitely made up their minds. By comparison, just 15% of Biden’s backers in the state describe their choice that way.

In New Hampshire, 65% of Sanders’ backers call themselves “enthusiastic” about supporting him ahead of all other candidates.

Sanders also leads the field on these two measures in Iowa. Forty-three percent have definitely made up their minds, and 67% feel enthusiastic in a state where enthusiasm can be an important motivator for voters to go out and caucus. Sanders does appear more reliant on first-time caucus goers than the other leading candidates in Iowa, with 36% of his backers saying this would be their first caucus, versus Buttigieg’s 25% and Biden’s 24%.

But neither Biden’s nor Buttigieg’s backers are as committed to their first choice as are Sanders’ supporters. And past caucus participation is by no means a perfect predictor of future participation from one election cycle to the next. 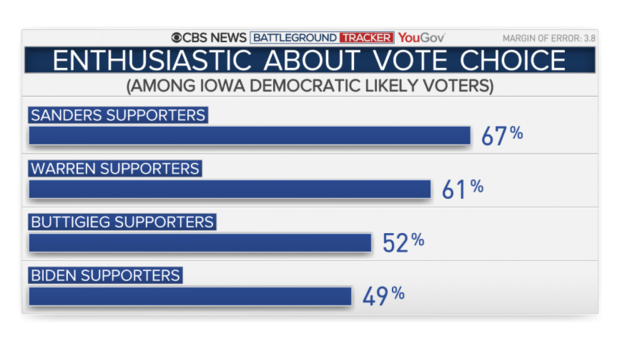 Underpinning Biden’s support is that more than half of voters in these states describe him as a “safe” choice — even if few see him as an exciting one — while half see Sanders’ policies as “too progressive” to win over swing voters this November. Weeks of other campaigns’ critiques against Warren may have taken their toll on her in this regard, too. In New Hampshire, 71% of those backing Biden think Warren’s policies are too progressive. 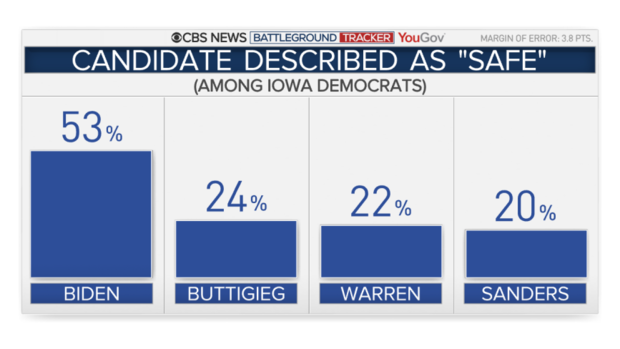 And in a sign of how much attention the campaigns attract in these small early states, two-thirds of voters told CBS News they had been following politics as much as usual over the holiday season specifically. Almost nine in 10 say they are paying at least some attention.

Back in November, when Warren enjoyed the lead in New Hampshire, she was described by 53% of voters there as “exciting.” Today that number has dropped to 37%, lower than before, though still a bit higher than Buttigieg and far higher than Biden. Two months ago, Warren led Sanders among liberal voters, and now she trails him. As he did in November, Biden continues to lead among moderates. 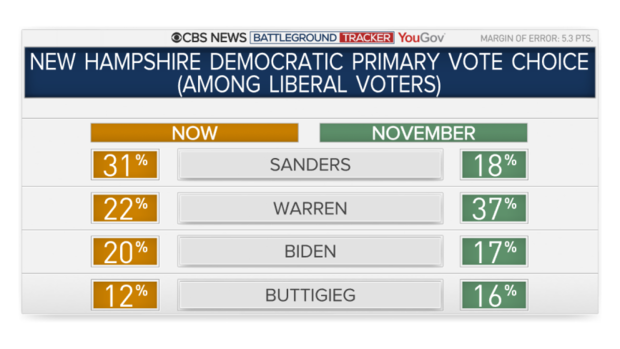 Among those considering Warren — though not necessarily picking her as first choice — fewer today think she could probably defeat Mr. Trump than thought so last fall. For context, none of these candidates has convinced a majority of Iowa and New Hampshire voters he or she is probably going to win. 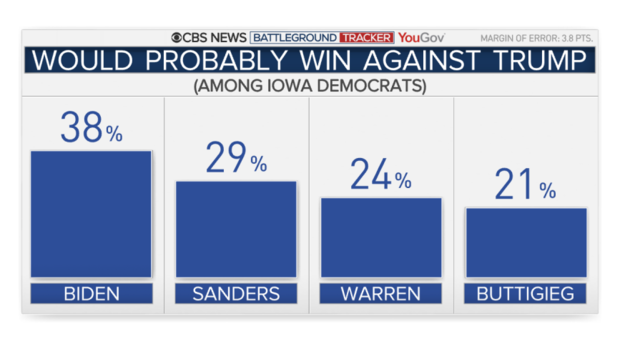 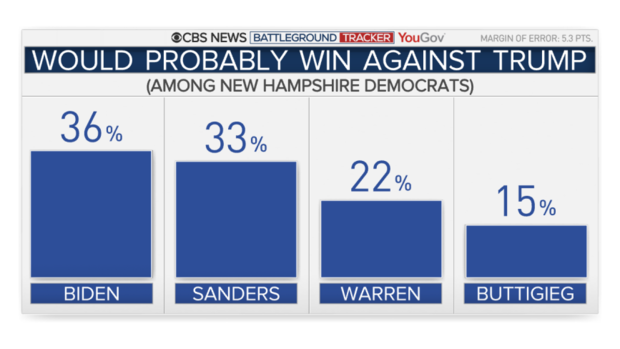 After nearly a year of parsing policies and details, in the closing weeks, a candidate’s approach and style can matter just as much. Voters in both states split when given the choice of someone who makes their points in a “nice and polite” way versus one whose style is to fight and argue their points.

Amy Klobuchar has inched up to 7% support in both Iowa and New Hampshire. As is the case with Biden and Buttigieg, most Democrats say Klobuchar’s policies are about right for winning over swing voters.

Buttigieg is being widely considered by half of Iowa voters and four in 10 New Hampshire voters, but he does not do as well as Biden or Sanders in New Hampshire at converting those considering him into first-choice votes.

One presidential candidate these voters aren’t seeing in person is Mike Bloomberg, who is skipping these contests in favor of the Super Tuesday states. Asked separately if they’d consider him were he campaigning in Iowa, 31% there say they would, which in context would have ranked above many other candidates but not at the level of the top four. In New Hampshire, 27% of likely voters say they would have considered Bloomberg.

Here’s how current support in Iowa and New Hampshire would translate into delegates. These are translations of current levels, not forecasts, but if these patterns did emerge next month, these two early contests would not settle much in the delegate counts that ultimately matter. 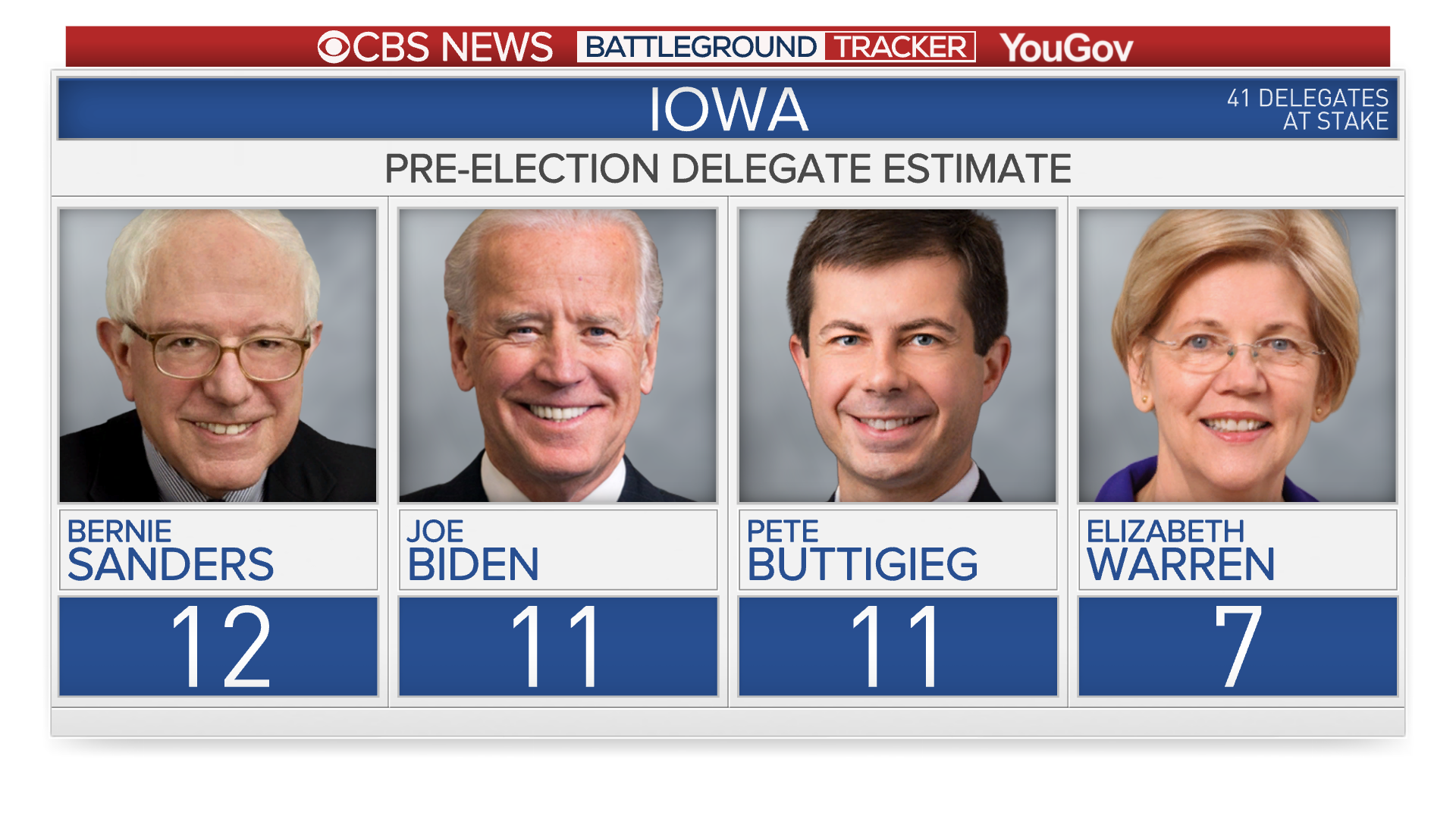 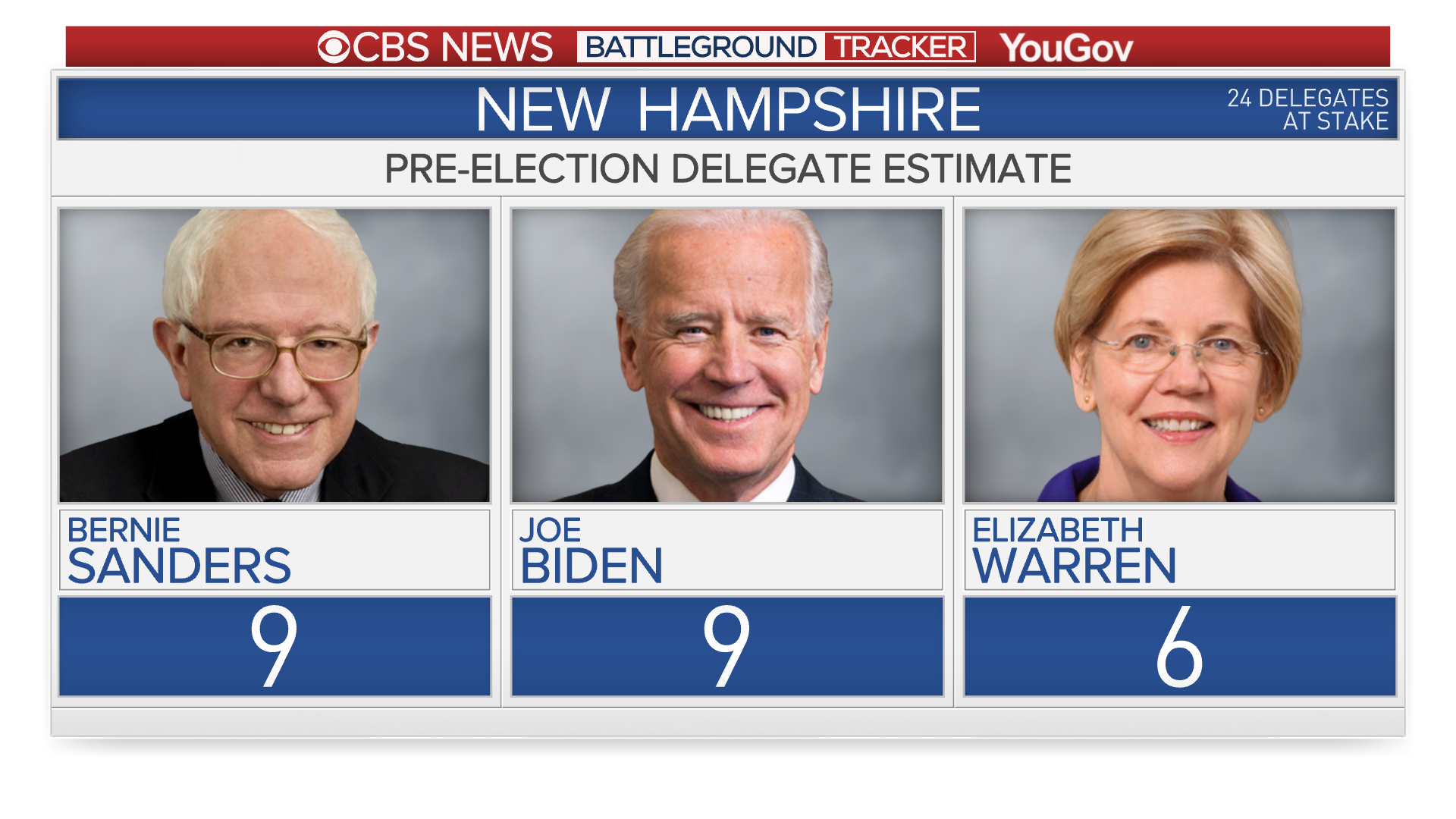