LEE COUNTY, Miss. (WCBI) – A Capital Murder suspect is in custody after leading deputies on a high-speed chase through Lee County.

Friday afternoon Lee County Deputies got word that a suspect they were looking for in connection with a December murder case in Plantersville was spotted in Verona. 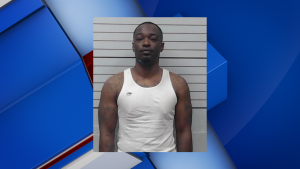 Deputies saw Dartonio Pinson in a truck on Raymond Avenue and tried to make contact with him.

Pinson reportedly led deputies on a high-speed chase that ended in Nettleton, where investigators say he got out of the truck and ran.

He was found a short time later in the backseat of a resident’s vehicle.

Other charges are possible.

Pinson is wanted for the shooting death of Justin Mayfield in Plantersville on December 22nd last year.

Pinson was the second arrest in that case last week.

Anthony Dixon was arrested and charged with capital murder the day before Pinson’s arrest.

Dixon’s bond has been set at 5 million dollars.

No bond has been set for Pinson yet.