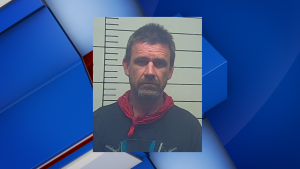 Albert Dale Chism of West Point is in the Clay County Jail charged with Grand Larceny.

According to the Clay County Sheriff’s Department, Chism stole a van out of someone else’s yard, took it to a scrapyard, and sold it for scrap.

Chism is being held on a 5 thousand dollar bond.

Clay County Sheriff Eddie Scott reminds people to be aware of strange vehicles and people on their property or their neighbors’ property.

Scott says if you see anything suspicious call his office.