According to a study published Wednesday in the journal Ecology Letters, birds’ legs are getting shorter, their wings are getting longer and they’ve been losing weight. Willard and his colleagues say climate change is to blame.

“As the breeding grounds of these birds are getting warmer, it may be advantageous to be smaller,” Willard said.

Willard has been studying the Windy City’s birds in a Field Museum lab since 1978. All of the birds he and volunteers have collected died after flying into buildings. Hundreds of millions of birds are estimated to die in building collisions every year.

“It started as a very casual study—someone mentioned that birds sometimes run into McCormick Place, and I was curious, so I went for a walk around the building one morning,” Willard said in a press release Wednesday. “I found a couple dead birds and I brought them back to the museum—I’ve always wondered if there had been no birds that morning whether I would have ever bothered to go back.”

The measurements of each bird were individually recorded before being given to researchers at the University of Michigan to analyze. While climate change wasn’t on their mind when they started the study, researchers said the results are compelling.

“We found almost all of the species were getting smaller,” lead author Brian Weeks, an assistant professor at the school for environment and sustainability at the University of Michigan, told BBC News. “The species were pretty diverse, but responding in a similar way. The consistency was shocking.” 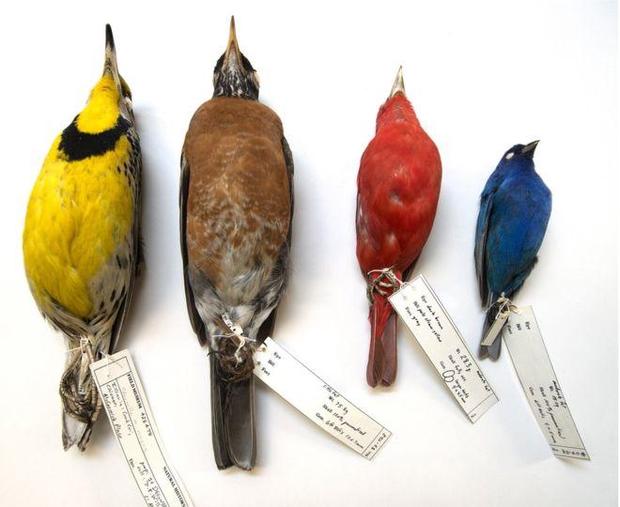 The changes in size were consistent in nearly all of the 52 species, across 70,716 bird specimens collected between 1978 and 2016. Researchers said the findings will be significant in understanding how animals are adapting to the climate crisis.

Overall, the birds’ mass lowered and their length dropped 2.4%. Their wing lengths increased by more than 1%, possibly because the birds are flying farther to find places to breed — a longer wingspan increases chances of survival.

“We had good reason to expect that increasing temperatures would lead to reductions in body size, based on previous studies,” said Brian Weeks, an assistant professor at the University of Michigan School for Environment and Sustainability and the study’s lead author. “The thing that was shocking was how consistent it was. I was incredibly surprised that all of these species are responding in such similar ways.”