Doctor Josie Shumake is the 49th recipient of the award that showcases a person’s ability to selflessly serve his or her community.

Doctor Shumake is a Lee High School graduate, a Mississippi State University, and a PHD graduate from the University of South Carolina.

While she has had an illustrious career, the Exchange Club is recognizing her service after retirement.

Shumake sits on the Columbus Municipal School District Board, she served on the Executive Board for Community Recovery for Lowndes County following the 2019 EF-3 tornado that hit Columbus, she is a member of Friends of a Library, and she has financially supported the Columbus Arts Council among other things.

Despite all of her service, Dr. Shumake is surprised that she has been chosen for the award.

“I think first of all I’m enormously honored to be a recipient of this because I know a lot of the people have been given this honor and I’m sort of still aghast that I’m with that crowd. So it means a lot. It really – really does. Totally unexpected,” said Dr. Josie Shumake, 2022 Book of Golden Deeds Recipient.

The Columbus Exchange Club began the award recognition in 1972.

The program was established by the Indiana Exchange Club in 1919. 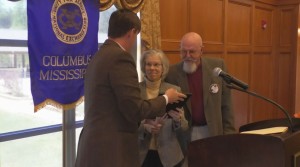