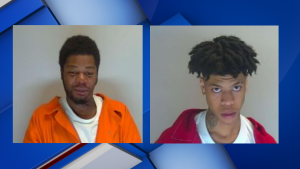 Investigators believe the victim was picked up in a vehicle and driven around. After he bought a drink, police say the victim was robbed near Belle Avenue Grocery.

Once in custody, he will be charged with armed robbery.

If you know where Beckwith is, call Golden Triangle Crime Stoppers or use the P-3 Tips App.

Catalytic converters stolen off of two church vans in Ackerman