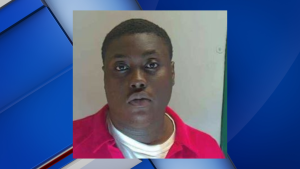 Slaughter turned himself in this afternoon to Columbus police.

He’s accused of shooting and killing Amarcus McMillian at a Waterworks Road apartment this past Friday.

A woman was also shot in the incident. Police described her injuries as non life-threatening.

Investigators have released few details about what led up to the shooting.

If you have any information call Golden Triangle Crime Stoppers or use the P3 Tips App.