COLUMBUS, Miss. (WCBI) – A Columbus police officer is accused of taking more than 37,000 dollars and selling a vulnerable person’s property. 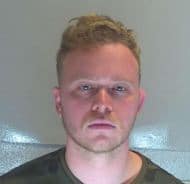 27-year-old Jameson Holder is charged with four counts of exploitation of a vulnerable adult.

Prosecutors are also charging Holder with selling the victim’s property on Highway 50, near Steens.

The Columbus city council suspended a member of the Columbus Police Department at its meeting last night but officials could not confirm the name of the employee.