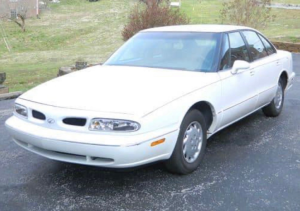 The 1996 Oldsmobile Model 88 was taken from the home of a Columbus resident near the Highway 82 bypass at Love’s Truck Stop.

Columbus Police said a man pushed his way into the home of a Columbus woman early Monday, after repeatedly ringing the doorbell. When he got inside, they said he tied her up, threatened her with a gun, and then stole her car. The victim, who is more than 80 years old, was injured. But none were life-threatening.

The missing Oldsmobile is a white, four-door car with an antique tag number A94757.

The Columbus police department is not releasing the name of the victim.

Columbus Police have asked for state and national assistance in locating the car and the suspect. Anyone with information on the case can call Crimestoppers at 800-530-7151.