We like to think that good work is always rewarded. But what if some people who could do good work can’t get their foot in the door in the first place? That’s where recent hiring initiatives that look beyond unfair stereotypes come in, as Lee Cowan reports in our Cover Story (Originally broadcast on February 11, 2018):

Twenty-seven-year-old Christopher Pauley thought he had it all figured out when it came to looking for a job. He had a detailed spreadsheet of each and every position he applied for – at least 600.

But despite his degree in computer science from California Polytechnic State University, he went two years with barely a nibble.

Did he get discouraged? “Oh my gosh, my morale really started to drop towards the end,” he said. “In fact, there were days where I would either hardly fill out any applications at all, or just simply not apply on anything.”

He knew he had the smarts for most jobs; he was a former Spelling Bee Champ, after all. But Pauley struggles with social and communications skills because he’s also autistic.

While precise numbers are hard to come by, by some estimates at least 80% of adults with autism are unemployed, even though their IQs are often well above average.

Sometimes their job skills can present themselves in unique ways. For Christopher, it’s video games. His ability to recognize patterns and his acute attention to detail — both hallmarks of autism — make his playing the video game Rock Band look pretty easy.

And they are the same skills he was hoping would impress prospective employers in the computer programming world. But he always had to get past that interview, which was a challenge at best.

Cowan asked, “Was there, in any of those interviews, a time where you just wanted to tell somebody, ‘Look, I know my social skills maybe aren’t quite what you expect, but I know I can do this job, and I know I can do a really good job if you give me a chance’?”

“But you never said that to anybody?”

“I just wasn’t comfortable. It makes me come across as desperate.”

At Microsoft, however, there was no need to hide his autism; they were looking for it. 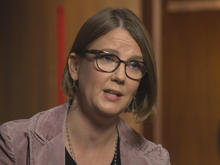 Cowan said, “So in a way, it sounds like this was almost a business imperative.”

“Heck, yeah!” she laughed. “People with disabilities are a strength and a force of nature in this company, myself included.”

Lay-Flurrie, who is profoundly deaf, communicates by reading lips and working with an interpreter. She helped create a hiring program for Microsoft back in 2015 designed to better identify candidates with autistic talents.

Instead of the traditional job interview focusing so heavily on social skills, the company has replaced it with a vetting process that lasts for weeks, and team building exercises like one called the Marshmallow Challenge. 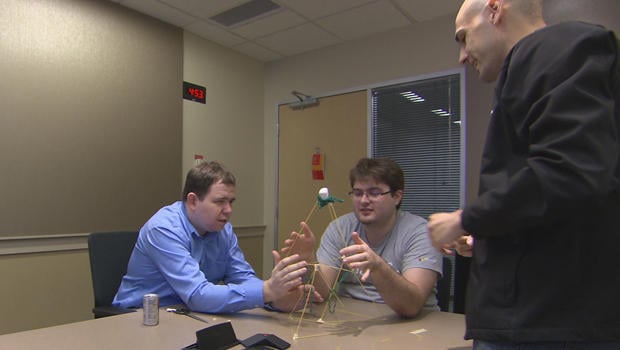 “Being able to watch a candidate in that environment as opposed to sitting across the table interviewing them makes all the difference in the world,” said Cowan.

“Every difference,” said Lay-Flurrie. “Every day, in any company, in any role, you’re going to be asked to work with someone else to figure out a problem or a challenge, or a project.”

“And yet in that scenario, they’re not as self-conscious that they’re being observed for a job – they’re just doing a task.” 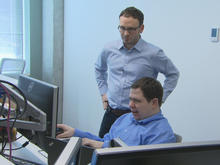 Christopher Pauley now works as a software engineer at Microsoft.

After Christopher Pauley went through a similar, unconventional interview process back in 2016, Microsoft quickly hired him as a software engineer.

His manager Brent Truell says he was immediately impressed by Christopher’s “out of the box” thinking.

“When we are faced with really complicated problems, the solutions to those aren’t always simple,” said Truell. “And Christopher always kind of brings new insights. And having that creative mind, he always brings something new to the team, which is really exciting.”

“Which is exactly why you hired him, right? 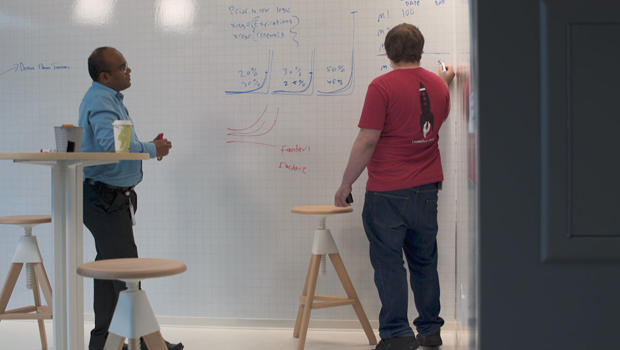 Microsoft has actively recruited workers on the autism spectrum, increasing diversity in the company.

It’s an idea that’s catching on.

Last year, 50 big-name companies — including JP Morgan, Ford and Ernst & Young — came together for a summit on how to bring more autistic adults into the workforce.

It was hosted at the Silicon Valley campus of German software maker SAP, which was one of the first large companies to reach out to the autistic community.

It started its Autism at Work Program five years ago, and since then it’s hired 140 people on the spectrum, with the goal of hiring more than 600.

“I have been in this industry for close to 30 years, and I can tell you it’s probably the single most rewarding program that I have been involved with,” said Jose Velasco, who heads the program.

The biggest surprise for him, he says, has been the variety of candidates applying. “Very quickly we started getting resumes from people that had degrees in history, in literature, in graphic design, attorneys … the whole gamut of jobs,” Velasco said.

“So really, you went into this thinking that people with autism would be good at certain jobs, and what you ended up discovering is they’re good at all jobs?” asked Cowan.

“They are good at just about every role.”

And they’re expected to perform in those roles, just like anyone else.

Mike Seborowski, for example, was hired three years ago and works in cybersecurity in SAP’s office outside of Philadelphia. When Cowan was visiting, Jose was helping Mike get ready for a long stint at the company world headquarters in Germany. 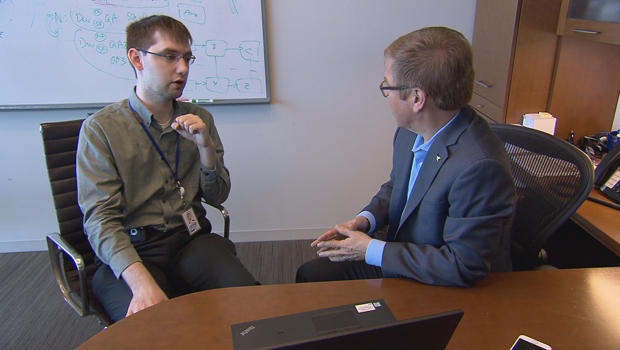 “If you would had told me six years ago that we would have an employee who was openly autistic in the company, going on a business trip to Germany for a month, I would have not believed you,” said Velasco.

Almost everyone has been a surprise, he says. He points to 26-year-old Gloria Mendoza.

She told Cowan, “You should see some of the videos I had when I was a child. I was not very socially skilled with the other kids. Not showing interest with other people, displaying some of the challenging behaviors that a child on the autism spectrum would have.”

Her parents, Rosaura and Enrique Mendoza, helped get Gloria years of speech and occupational therapies, as well as access to top doctors. “When she was very young, I used to worry so much because I never thought she will overcome all what she has done,” said Rosaura. “So, it was like a very dark cloud.”

Gloria made huge strides in her childhood, but her parents were still concerned about how autism might affect her future.

She made it through both high school and college; in fact, she got two degrees from Gettysburg College in Pennsylvania – one in music (she has a beautiful singing voice), and another in computer science. And yet, a year after graduating – and hundreds of resumes later – she still couldn’t find a job … until she applied to SAP.

“Probably the best part about working here is that I can use the skills which I have studied whilst being among people that understand who I am and how I’m different from everybody else,” she said.

SAP put Mendoza through five weeks of training, which included working on her social skills.

She’s now in something called Digital Business Services, where she deals directly with customers. 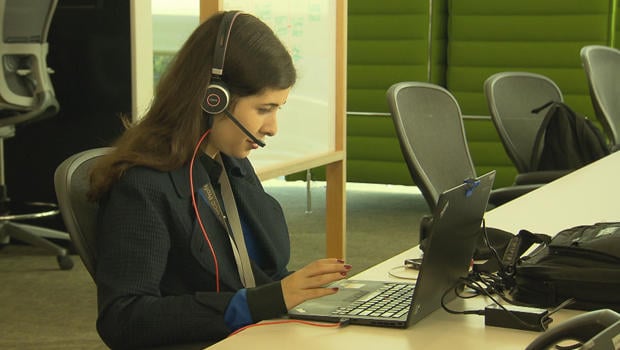 Gloria Mendoza engages with customers in her position at SAP.

Cowan asked, “What’s the one dream you really want to come true?”

“Probably that I can be really up there in my department, earning a lot of money, and still keeping the friends that I have,” she replied.

Her new friends are mostly co-workers in the autism program, and they try to get together regularly. Cowan watched as Mendoza and her friends participated in Game Night.

“And that, CBS, is how you play Smash Brothers!” said Gloria. 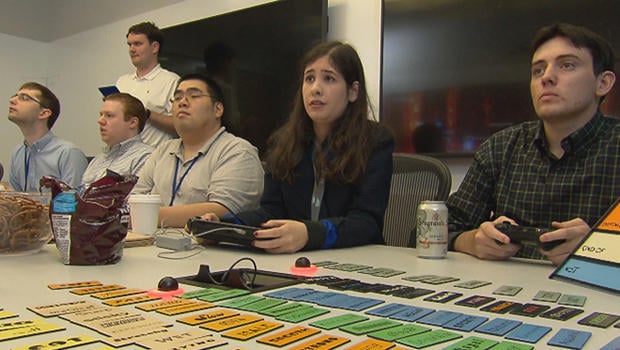 Software company SAP has hired many workers on the autism spectrum, who find camaraderie and fulfillment in the workplace.

She told Cowan, “I never really had that many friends when I was younger, and having this wide variety of friends that understands me really makes all the difference for me.”

How so? “‘Cause I can express myself in ways that people won’t look at me weird. And it turns out that a lot of people have common interests as I do.”

SAP boasts a retention rate of about 90% for their autistic employees. Part of that may be due to the fact they’re not just set adrift in the workplace all alone. Each participant in the program is assigned a mentor from within the company – like an on-site guardian angel. 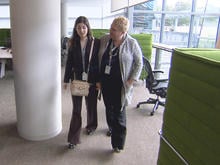 Gabby Robertson-Cawley, who has a cousin on the spectrum, volunteered to work with Gloria. “I think it’s just the rewards of getting to be friends with these colleagues who have autism – it’s not something you get in your typical corporate day-to-day experience,” Robertson-Cawley said.

Microsoft also has mentors. Melanie Carmosino, who works with Christopher Pauley, has a personal connection as well; she has a son who’s autistic.

Cowan asked, “What have you taken away from this whole experience, personally?”

“Hope,” Carmosino replied. “I think that this program gives hope to the autism community. It gives hope to parents like me, and it gives hope to people like my son that a company can, and will, look past their differences and see their gifts and let them contribute to society just like everybody else.” 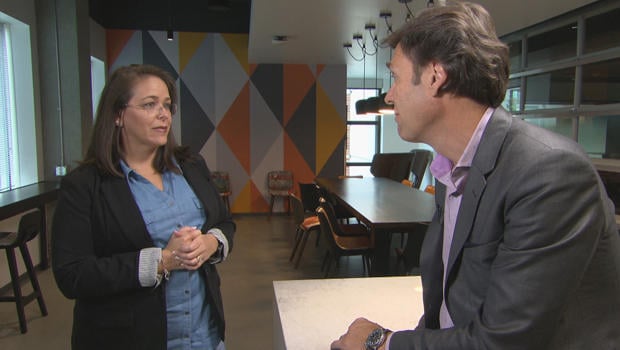 Melanie Carmosino, who works with Christopher Pauley at Microsoft, with correspondent Lee Cowan.

Christopher Pauley is now independent, living on his own in a high-rise apartment, something he’s always wanted.

Cowan said, “I don’t want to ask how much you’re making, but you’re doing pretty good, it sounds like, yeah?”

“Could you ever imagine you’d be making this much money?”

“No, I never did! Honestly I would have been perfectly happy with, like, half the money I’m making now.”

He bought a car and drives himself to work – and for the first time, he says, looks forward to arriving at a place where he’s accepted for who he is.

He knows there are still challenges ahead, but given a chance to prove his worth, says Christopher, has given him an optimism he never had.

Cowan asked, “If other kids, or young adults, or adults with autism are watching this, what’s your message to them?”

“Don’t give up, and make sure to always aim high,” he replied. “Don’t aim in the middle You know, shoot for the stars every time, ’cause you never know what might happen.”