Washington — In recent weeks, the Trump administration has directly pointed to the controversial “Remain in Mexico” policy as one the chief reasons the number of apprehensions along the southwestern border have decreased over the past two months. Ken Cuccinelli, President Trump’s top official at U.S. Citizenship and Immigration Services (USCIS), recently lauded the program as a “spectacular success.”

The administration is now signaling that the program will continue indefinitely, even if there are significant declines in border apprehensions.

“MPP is a tool that Congress provided DHS to maintain operational control of our border and to facilitate an expedited removal proceeding process,” a Department of Homeland Security official told CBS News, referring to the policy by its official name, the Migrant Protection Protocols (MPP). “While we hope that with lower numbers there will be lower returns under MPP, this is a program that we’re building to last.”

Migrant kids play at a shelter at the Viento Recio church, in Matamoros, Mexico, on Friday, Aug. 2, 2019. Emilio Espejel / AP

Under the policy, which is being challenged in court, the Trump administration has returned tens of thousands of asylum seekers to Mexico to wait for their hearings in U.S. immigration court. In addition to this program, U.S. officials have also implemented a policy known as “metering” to limit the number of people who can seek asylum at highly transited ports of entry, effectively ensuring that tens of thousands of migrants are required to wait in Mexico, either for the court date or to seek asylum for the first time.

In Mexico, the vast majority of those returned struggle to find American lawyers, shelter and employment. Many also fear being kidnapped or assaulted during their prolonged stays in Mexican cities like Tijuana, Ciudad Juárez and Matamoros, where crime and insecurity are rampant.

The DHS official said on Monday that more than 31,800 migrants have been placed in the program and returned to Mexico, but cautioned that the figure “is not indicative of the number of people [in Mexico] currently awaiting” a U.S. court hearing. Some of those in the program, citing desperation, opt to go home and abandon their asylum claims, and the Mexican government has already been operating a program to transport them back to their home countries in Central America.

The “Remain in Mexico” policy has been implemented at border sectors near San Diego, Calexico, El Paso, Laredo and Brownsville, located in the busy Rio Grande Valley. Since it reached an agreement in June with the Mexican government to avert the president’s threats to impose tariffs on Mexican goods, the Trump administration has pledged to expand the program along the entire border.

The U.S., the DHS official added, is working with the Mexican government and considering “infrastructure and capacity capabilities on both sides of the border” to determine where the program will be implemented next. 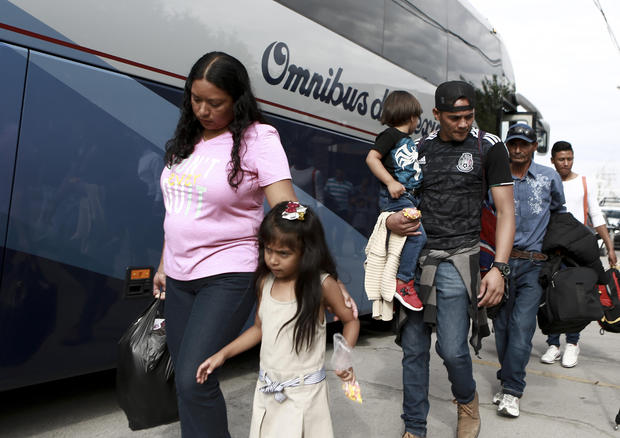 Central American migrants prepare to board a bus as they voluntarily return to their countries, in Ciudad Juárez, Mexico, on Tuesday, July 2, 2019. Christian Chavez / AP

When the policy made its debut in San Diego in December of last year, the administration cited a “migration crisis” at U.S.-Mexico border caused by an unprecedented influx of Central American families and unaccompanied children heading north. The agency said the program was instituted, in part, to deter “false” asylum claims and devote “more attention on those who are actually fleeing persecution.”

Apprehensions along the southern border decreased in June and July from the height of the recent surge in May, when U.S. officials apprehended 133,000 migrants. In recent years, border crossings along the U.S.-Mexico frontier have also dwindled in the summer months because of the heat in the region.