An Air Force veteran who lost both of his legs in his eighties hasn’t lost his sense of adventure — and he’s jumping into his nineties without looking back.

It’s safe to say Stan Rohrer is a risk-taker. “My daughter asked me if I would like to jump with her, and since she was jumping, I said yes,” Rohrer told CBS News correspondent Nikki Battiste. “But I didn’t realize it was going to be such a production!”

Rohrer jumped 13,000 feet from an airplane above southern California’s Lake Elsinore to celebrate turning 90 this week.

The retired math and physics teacher took the leap with his daughter, Linda, who said: “I joked in the beginning, I was like, ‘You know what, Dad? If you’re going to go, this is a good way to go.’ And he was like, ‘Linda, I’m not dying.’ I was like, ‘OK.'”

She said her dad has been blessed with more energy than most.

“He can still beat a 20-year-old in tennis,” she said. “It’s the will and the desire, and I think that really is an inspiration to a lot of people.”

Rohrer regularly hiked mountains. But in his eighties, he lost both legs because of blood clots behind his knees. That still didn’t slow him down.

“When you’re hanging out with people that are 40, 50 years younger than you are, you’ve got to put forth a little bit of effort, extra effort,” he said.

The avid biker, wheelchair tennis player and kayaker modified his truck so he can drive himself anywhere. He uses pulleys to get his wheelchair in and out, and unloads his kayaks by himself. 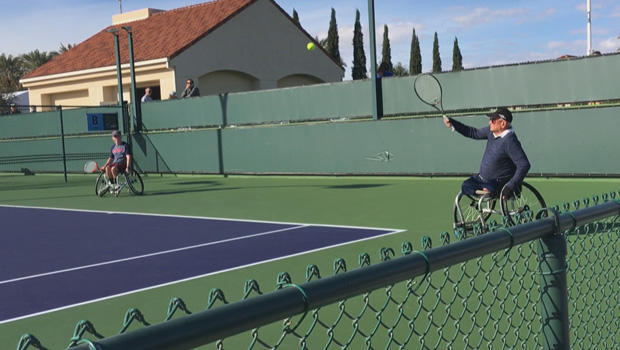 His daughter said, “He’s an inspiration. Living is a choice every day, and I think if you choose that, there’s a lot you can do.”

Rohrer said the skydiving experience tops his list of the craziest things he’s done in his life — and he would like to do it again. “It was enjoyable,” he said.