For the last two years, Richard and Linda Brown have been living in a shell of a home — no insulation, drywall or flooring — while trying to raise four kids.

Their house in Louisiana was destroyed by floodwaters in 2016. At the time they didn’t panic, because they had a flood insurance policy worth $168,000. To date, they’ve received less than half of that — around $62,000.

“We pay into this premium, and all I want is [it] just to be fair, and we weren’t getting fair,” Linda said.

Two years later, they’re living in a house that’s still exposed down to the studs.

Richard and Linda Brown in their Louisiana home.

The Browns decided to fight the National Flood Insurance Program (NFIP) in court. Established 50 years ago to help flood victims, the NFIP is run by the Federal Emergency Management Agency (FEMA) and responsible for all flood policies in the United States. Insurance premiums and taxpayer dollars fund the program, to the tune of about $3 billion a year.

But FEMA doesn’t administer all the policies. It outsources most of them to private insurance companies called “write your owns,” or WYOs.

The WYOs — and all of their agents — get paid out of the same pot of money as flood victims. Some years, up to two-thirds of that money goes to the WYOs — and the attorneys they hire to fight flood victims’ claims.

In effect, by paying their premiums on time every year, homeowners like the Browns help fund the very lawyers fighting them in court. 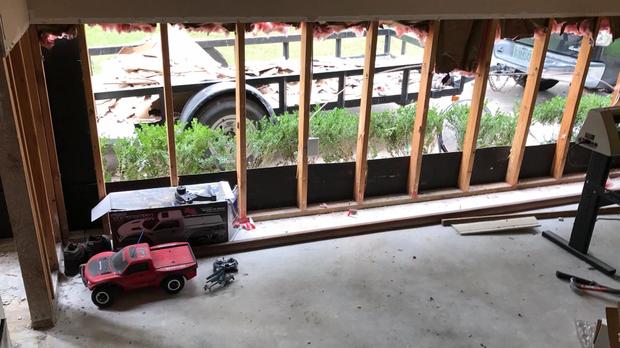 The Browns’ home, two years after flooding in Louisiana destroyed much of it.

“It’s like people make money off disaster. The more they can make, the better,” Richard said.

A 2016 government report found little oversight of flood litigation spending by FEMA. One flood case was estimated to cost $87,000 in legal fees, just for trial preparation. That homeowner’s policy limit was $25,000.

Gerald Nielsen’s Louisiana law firm was hired to fight the Browns’ claim. For more than 30 years, Nielsen has been the go-to lawyer for insurance companies fighting against flood victims — a role for which he has drawn anger from Congress.

“He dealt with [Superstorm] Sandy victims like they were the perpetrators, enriching himself at their expense,” New Jersey Democratic Sen. Bob Menendez said during a Senate hearing, referring to the 2012 hurricane that did billions of dollars in damage to the East Coast.

Court documents show Nielsen’s firm demanded depositions to verify receipts, a process that would have cost far more than the bills themselves.

“Can you imagine losing everything that you have ever had in your life? And you paid for insurance,” said John Houghtaling, the Browns’ attorney. His law firm also represented victims of Sandy in court against Nielsen’s firm.

“There was no effort to mitigate the cost. In many cases, we were asked to have experts re-inspect — for a third time — homes that were totally destroyed,” Houghtaling said.

Nielsen declined our request for an on-camera interview. He hadn’t acknowledged receiving our questions, so our producer went to his office. A man said he was there, but “not available.”

We caught up with him in the parking garage to ask about his legal fees.

“I’ve got to go through ethics counsel because some of what you asked clearly is privileged,” Nielsen said.

Later, Nielsen wrote CBS News a letter saying he was acting at the direction of his clients and all his bills were reviewed by the clients and FEMA.

The Browns have a message to the people who could do something about their situation.