Sheriff Ben Caldwell posted on Facebook that the inmates cut a hole through the roof of the jail.

Landon Braudway, Antonio Reyes, Samuel Sims, and Hunter Wiginton are the prisoners that were not found in the cells. 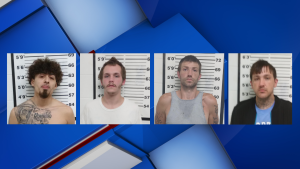 Surveillance footage showed the men running from the jail toward the National Guard Armory about 2 AM.