Girlfriend and mother both arrested in connection to deadly shooting

ACKERMAN, Miss. (WCBI) – The mother of a teenager charged with murder is arrested in connection with the deadly shooting. And, this afternoon, his girlfriend was also charged. 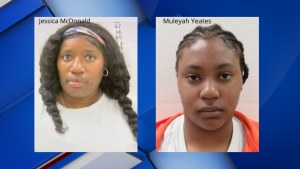 Ackerman Police Chief Tim Cook says McDonald brought the teenage shooting suspects to Millwood apartments and took them back to Louisville after the shooting.

14-year-old Detravion Ball and 16-year-old Cordarius Brown are both charged with first-degree murder.

The shooting happened Sunday afternoon at Millwood apartments. That’s where 18-year-old Derius Kennedy was shot. He later died at the hospital.

Cook tells WCBI the arguments leading up to the shooting were mostly between family but there could be some gang activity involved.

The investigation is still ongoing.

More officers are at Choctaw County High School as a precaution against any retaliation.