A 27-year-old grocery store clerk from Maryland wanted to keep working through the coronavirus pandemic, even though her job put her at risk. Leilani Jordan had a disability, but she told her mom she wanted to continue working at Giant Food because she wanted to help people, CBS affiliate WUSA-TV reports.

However, Jordan’s last day at work was March 16. Giant Food officials said on March 28, the store learned that Jordan was sick. She was hospitalized with coronavirus symptoms and tragically lost her battle with the disease, Giant Food confirmed to CBS News..

“She was my butterfly,” Jordan’s mother, Zenobia Shepherd, told WUSA. “I know she’s in heaven and she’s there welcoming everybody.”

Shepherd said her daughter worked at the store in Largo, Maryland for six years as part of Giant Food’s disability program. “She just loved her little job,” Shepherd said. “She did whatever they needed helping people.”

Shepherd said in other interviews that her daughter had cerebral palsy. But despite the risk of exposure to coronavirus, Jordan told her mother last month that she really wanted to keep working, especially because others weren’t showing up. “‘Mommy, I’m going to go to work. I’m going to still go to work. I want to help,'” Shepherd recalled her saying.

When she realized her daughter’s cough was getting more serious, she took her to Walter Reed Medical Center for treatment. “When she got out of the car, she fell. She collapsed in the parking lot,” Shepherd told WUSA. “When they got her, she had a 104-degree fever. They put her in isolation. She called me and said, ‘Mommy, I can barely breathe.'”

Jordan was put in an isolation room on a ventilator, her mother said, but she did not survive.

Giant Food said in a statement that they were saddened to learn the news. “We were informed of her passing on Thursday morning by her family. We can only imagine the heartache they are experiencing and have offered our support during this difficult time,” Giant Food spokeswoman Felismina Andrade said.

CBS News has reached out to Shepherd for more details about her daughter. Shepherd has spoken to several publications about Jordan’s death and told them her daughter had cerebral palsy.

In a CNN interview, Jordan’s stepfather, Charles, said he discovered a goodbye message that she recorded on her phone before she died. “She (had taken) her password off of her phone,” so it wasn’t locked, he said. “She made a video saying goodbye to all us, and wished everybody the best,” he said, adding that Jordan addressed her sisters, friends and service dog, Angel, in the video.

“She told them, ‘See you on the other side,'” Charles said.

The family has shared photos of Jordan in the hospital to show just how devastating the disease can be. 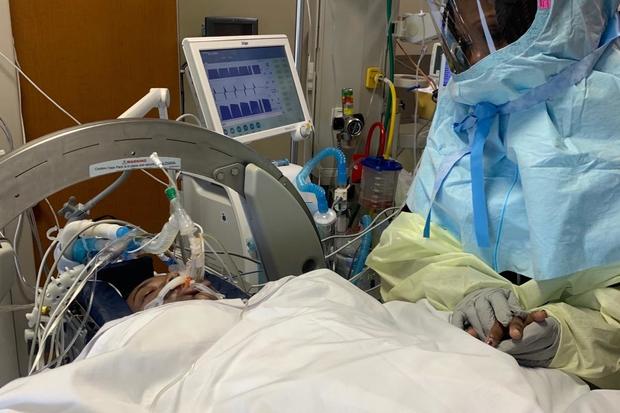 Shepherd said her daughter collapse in the hospital parking lot and was put in isolation on a ventilator. Jordan later died of COVID-19, she said. GoFundMe/Leilani (Butterfly) Celebration of life Fund

In an emotional interview with MSNBC, Shepherd said her daughter told her the store was short-staffed and that Giant Food was not providing gloves and that she had to bring her own hand sanitizer to work.

“No one knew just how much of an impact she made except for the customers,” she said. “Leadership is not going out of their way to protect the vulnerable class like the seniors who shop there… and the people with disabilities who worked there.”

Through tears, Shepherd said Giant Food gave her a certificate marking Jordan’s six years of service at the store, as well as her last paycheck. “She would’ve loved to receive this herself. Leilani’s paycheck. I got this paycheck yesterday for twenty dollars,” Shepherd said through tears. “Twenty dollars and sixty four cents. My baby’s gone because of $20.64. You know what using the proper PPE could’ve done for my baby?”

MSNBC host Stephanie Ruhle also began crying during the interview. Shepherd said customers had been calling to thank her for all the help her daughter gave them.

“What mother wants to lose their baby to a virus that we can’t see?” she said. “For $20.64 they could’ve bought a box of gloves to give them. They could’ve kept that paycheck. She did this from her heart, not for the money.”

In response to Shepherd’s MSNBC interview, Giant Food said at the time of Jordan’s last day of work, the CDC was not recommending associates or customers wear masks, so they were not being provided by the stores.

“The CDC has recently updated its recommendations and we have supplied all of our associates with plastic shields to wear if they choose,” the company said in an email to CBS News. The company said stores always had hand sanitizer and/or cleaning products available. Employees have also always been allowed to wear gloves, but are only mandated to do so if they work as a food service associate, Giant Food said.

The company said it has been “supporting Leilani’s family during this difficult time and have been in direct contact with her mother to address her needs.”

The company said that as an essential business, it is “committed to providing food and essential products to our communities, but we want our team to stay home if they are having any symptoms and feel unwell or are uncomfortable coming to work.”

This week, Giant Food announced on its website that it was implementing additional social distancing policies in all of its stores, limiting the number of customers allowed in at a time and making aisles one-way traffic only.

Jordan’s family has made a website to memorialize her, writing that they are facing medical bills and need assistance caring for her service dog, “who has become part of the family.” They have started a GoFundMe to raise funds for medical bills and Jordan’s funeral.