The suspect in an attack on a German synagogue on Judaism’s holiest day had around nearly nine pounds of explosives in his car and wanted to carry out a massacre, Germany’s top prosecutor said. Many questions remain about how the man was able to obtain the weapons he used in the assault. Two people outside the building were killed.

As officials sought to reassure an unsettled Jewish community and address concerns about rising right-wing extremism, Germany’s president visited the scene of the attack in Halle and urged his nation to stand up for their Jewish compatriots.

The assailant — a German citizen identified by prosecutors only as Stephan B., but identified in local media reports as Stephan Balliet, 27 — tried but failed to force his way into the synagogue as around 80 people attended services inside. He then shot and killed a woman in the street outside and a man at a nearby kebab shop. He is now in custody.

A person with a flag of Israel stands next to flowers and candles in front of a synagogue in Halle, Germany, Thursday, Oct. 10, 2019. A heavily armed assailant ranting about Jews tried to force his way into the synagogue on Yom Kippur, Judaism’s holiest day, then shot two people to death nearby. AP Photo/Jens Meyer

“What we experienced yesterday was terror,” said Peter Frank, the chief federal prosecutor. “The suspect, Stephan B., aimed to carry out a massacre in the synagogue in Halle.”

Frank said his weapons were “apparently homemade” and the explosives in the car were built into “numerous devices.” The suspect livestreamed the attack on popular gaming site Twitch, where he identified himself as a Holocaust denier ranted in English about Jews, and also posted a “manifesto” online before embarking on the rampage. He “wanted to create a worldwide effect” and encourage others to imitate him, the prosecutor added.

Twitch said in a statement Wednesday that it “worked with urgency” to remove the 35-minute video, which it said was online for about a half an hour before it was flagged and removed. Downloaded versions of the video were also circulated among online far-right groups, according to the SITE Intelligence Group, a U.S.-based company that tracks the online activity of white supremacist and jihadist groups.

Twitch said it has taken steps to help prevent proliferation of the video.

“Twitch has a zero-tolerance policy against hateful conduct, and any act of violence is taken extremely seriously,” the company said in a statement obtained by CBS News. “We worked with urgency to remove this content and will permanently suspend any accounts found to be posting or reposting content of this abhorrent act.”

The filming of Wednesday’s attack echoed another horrific shooting halfway around the world when a far-right white supremacist in March killed 51 people at two mosques in Christchurch, New Zealand and livestreamed much of the attack on Facebook. That massacre drew strong criticism of social media giants for not immediately finding and blocking such a horrific video.

Germany’s federal prosecutors said Thursday that they would ask the investigating judge at the Federal Court of Justice to issue an arrest warrant against the suspect, Reuters reports. The gunman is suspected of two counts of murder, nine counts of attempted murder, and other offenses, Frank said. His apartment was searched and investigators were sifting evidence, but “we face a lot of questions,” Frank added.

Those questions include how the suspect was radicalized, how he decided to carry out the attack, how he got ahold of the material to build weapons and explosives, whether he had supporters, and whether anyone else encouraged him or knew about his plan, Frank said. Prosecutors will have to sift through his communications and his activities on the dark web, a part of the internet hidden from public view. 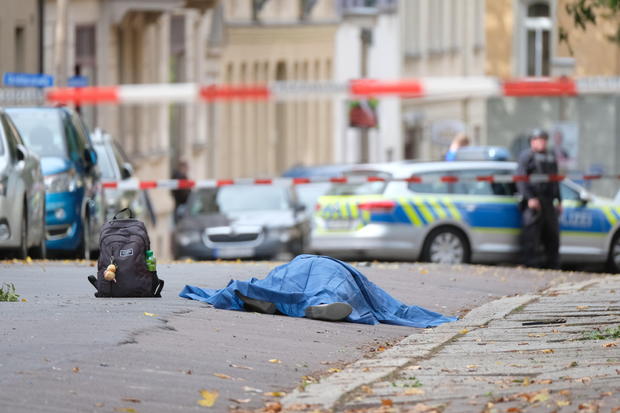 A body lies on a road in Halle, Germany, Wednesday, Oct. 9, 2019 after the shooting incident.  Sebastian Willnow / AP

Officials didn’t give details of the victims, who were killed outside the synagogue and in a nearby kebab shop.

The head of Germany’s Jewish community, Josef Schuster, called the absence of police guards outside the synagogue on Yom Kippur “scandalous” as members of the congregation described waiting behind locked doors for the police to arrive, which took more than 10 minutes.

The head of the city’s Jewish community, Max Privorozki, was among those inside who watched the man trying to break in on monitors linked to a surveillance camera.

“We saw everything, also how he shot and how he killed someone,” he said, standing outside the damaged door. “I thought this door wouldn’t hold.”

Privorozki said it took a little while for worshippers to understand what was going on.

“That was a shock for us. It was Yom Kippur, all phones were switched off. We had to understand what was going on first — then switch on my phone and then call the police,” he said. “It was really panic. But I have to say after that, when the police came, we continued with the worship service, that lasted another three hours, the synagogue worship service.”

The worshippers were brought out on buses several hours later. A video posted by a reporter for Israeli public broadcaster Kan showed people on a bus dancing, embracing and singing.

Ten Americans were inside the synagogue at the time of the attack, and all were safe and unharmed, U.S. Ambassador to Germany Richard Grenell said on Twitter. Rebecca Blady, who moved from New York to Berlin earlier this year, was one of the Americans inside. She told CBS News’ Roxana Saberi it was “terrifying,” but said it was “spiritually, also, a very deep experience.”

When asked whether it deepened her faith, she replied: “I have to say yes. I mean, I’m here.”

Synagogues are often protected by police in Germany and have been for many years amid concerns over far-right and Islamic extremism. There has been rising concern lately about both anti-Semitism and right-wing extremism in the country.

Germany’s domestic intelligence agency says the number of anti-Semitic acts of violence rose to 48 last year from 21 the previous year. It also said the number of known far-right extremists rose to 24,100 people last year, with more than half of them considered potentially violent.