He worried no one would attend wife's funeral. Hundreds came

Hundreds of people showed up Friday for the memorial service for El Paso shooting victim Margie Reckard. Reckard’s husband, Antonio Basco, had invited the community to attend, saying he had no family in the area and did not want to be alone.

Perches Funeral Homes told CBS El Paso affiliate KDBC that it has gotten calls and flowers from all over the world from people asking how they can help Basco honor his wife. The funeral home said it had to move the mass to a larger location because of how many people are expected to attend.

“I’ll always cry over her. I will always be sad. She’s the love of my life,” Basco said at the funeral.  He has visited the memorial site every day since the shooting.

The funeral home had posted about Margie Reckard’s funeral on their Facebook page, which went viral. She was one of 22 people killed when a gunman opened fire at the El Paso Walmart on August 3.

Basco was seen after the shooting crying at the memorial and clutching the cross with her name on it. He said he and Reckard had no children together and he had no family in the area.

Hundreds lined up for hours outside the funeral home on Friday. When Basco arrived, people shouted blessings in English and in Spanish and someone gave a gift that appeared to be an El Paso tee shirt, the Associated Press reported.

“We told him that El Paso loves him and this is his home,” Delilah Solice told Mireya Villarreal on “CBS This Morning.” “And he has family here and he is not alone.”

“I love y’all, man,” Basco said before breaking down, according to the AP. Basco, who appeared overwhelmed at times, personally thanked people in the crowd. Mrachis sang “Amor Eterno,” which has become El Paso’s anthem since the shooting.

“As I was walking in through the front door right now, I saw all these flowers, and I felt so uncomfortable that I started to cry. It’s very, emotional,” Maria Barrientos told KDBC. 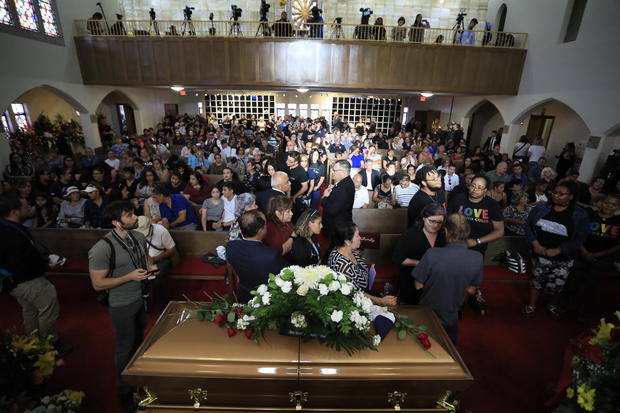 According to El Paso station KTSM-TV, Reckard’s family is coming from out of town. Reckard was born in Baltimore and had two sons and a daughter.

“We want to thank the people of El Paso because without them I don’t know what we would have done,” Reckard’s daughter-in-law, Hilda Nuzzi, told KTSM-TV.. “Everyone is amazing.”