COLUMBUS, Mississippi (WCBI) – An active week of weather is expected with multiple rounds of heavy rain and storms.

MONDAY: Rain and embedded thunderstorms will overspread the region later this morning. Locally heavy rain and small hail are possible in the strongest activity, but no severe weather is expected. Temperatures won’t budge much through the day, staying near 60 degrees.

TUESDAY: A good portion of the day will remain dry and notably warmer. Strong southerly winds will bring in warmer, more humid air ahead of a surging front. Favorable wind shear will yet again set the stage of strong to severe storms developing in the afternoon and evening hours. All modes of severe weather are possible, including a tornado threat. Weakening wind shear after midnight should result in storms losing their luster. 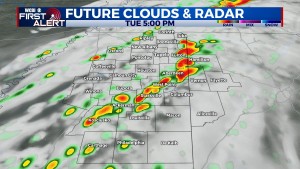 WEDNESDAY: The aforementioned front will briefly push south of the region, bringing in much cooler air. Clouds hang tough, and spotty rain remains possible as well; however, temperatures will likely stay in the 50s or upper 40s much of the day.

THURSDAY: Another humid and warm surge is expected with daytime highs back in the 70s ahead of yet another front. Showers and storms become likely in the afternoon and evening hours. While it’s too early to pin down specific threats, some degree of severe weather potential remains with this system as it passes through. 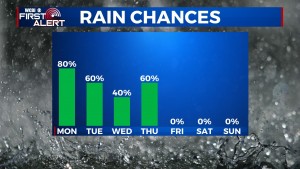 FRIDAY: Clouds will be slow to clear behind Thursday night’s front, but temperatures will assuredly drop. Highs will hold in the 40s much of the day.

WEEKEND: Uncertainty remains as to whether or not yet another system could spread rain toward the region Sunday. Regardless, a mostly cloudy sky and below average temperatures will be the general rule.