Morgan Stickney, of Bedford, New Hampshire, has always been something of a mermaid. By age 14, she had a room full of swimming medals. Ranked top 20 in the country, she was dreaming of the Olympics.

But one day in eighth grade, her entire life changed. “I was walking to swim practice, and then my left foot just all of a sudden started hurting,” she said.

Over the next six years, the pain became excruciating, puzzling even her doctors. She had multiple surgeries and was on heavy painkillers, but there was no improvement. Eventually she could no longer walk. She was left with only one sure solution.

“They decided that it was time to amputate the leg, so we did a below-the-knee amputation,” Stickney said.

“That seems like a big deal,” said correspondent David Pogue.

“Yeah! I mean, I was struggling for six years. I was on opioids, and my life was kind of, just, there really wasn’t much left of it, because everything had just gone downhill so far.”

But Stickney was determined to recover, and just three months later she was back in the pool, even winning two events at the 2018 National Paralympic Championships.

She even moved to Colorado Springs to train for the 2020 Paralympic Games in Paris. But suddenly the pain came back, this time to her right leg.

Doctors at Brigham and Women’s Hospital in Boston finally found a diagnosis: a vascular disease so rare it doesn’t even have a name. In October 2019, Stickney’s right leg was amputated.

“Losing my left leg, actually, emotionally I did really well,” Stickney said. “When this happened with my right leg, it was devastating for me and my family. And so, it was a huge struggle for me.”

It was a huge struggle for her parents, too, who have been by her side through all her medical treatments.

They had health insurance. Pogue asked, “And of course they paid for all of this?”

Morgan’s mom Sheri laughed: “That would be wonderful.”

Tony and Sheri Stickney faced a mountain of medical expenses not covered by insurance, including medical bills, copays, and ambulance rides. They say they’ve now spent over a quarter of a million dollars of their own, and they’re in debt.

Pogue asked, “During these medical procedures, is there a tally in the back of your head going, ‘Oh, my God, how am I gonna afford this?'”

“Never even thought about it once,” Tony replied. “It’s whatever we have to do to make it happen. Most important thing is to make Morgan healthy.”

This past September, just before Morgan’s second amputation, Sheri’s best friend, Robin Pelletier, offered to start a GoFundMe campaign: “She said, ‘I think that this would be something that could really help you guys.,'” said Sheri.

“It’s not something that we would ever have hoped that we would, you know, have to get involved in other than to donate to somebody else,” Tony said. ” But Morgan needs a lot, you know, long-term.” 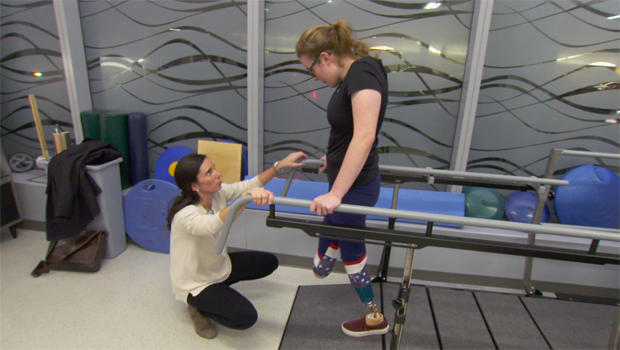 Morgan is just one of the thousands looking for help on GoFundMe. It’s a crowdsourcing website, now almost 10 years old, where anyone can appeal to the public to contribute money for pretty much anything. In the old days, people might have turned to the church or the government for help; these days, the first place everyone seems to turn to is GoFundMe.

GoFundMe campaigns always sprout up after natural disasters and mass shootings. But people also raise money every day for funeral expenses, for animals, for acts of kindness, and for acts of politics (like one campaign to build a border wall in New Mexico).

But a third of all GoFundMe campaigns are for medical expenses, like Morgan Stickney’s. So far, her campaign has raised more than $45,000. 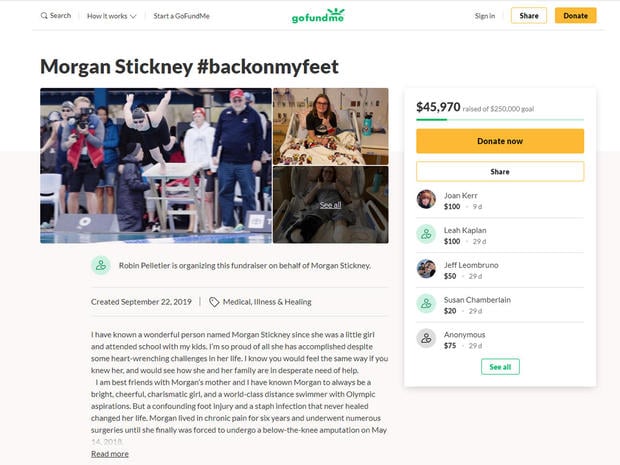 “We’ve become the world’s largest crowdfunding site,” said GoFundMe CEO Rob Solomon. “People think of us all the time when there’s a problem. More than $9 billion has been donated on the platform. And this is pretty staggering: 120 million donations have happened on GoFundMe.”

GoFundMe wouldn’t tell us exactly how many campaigns are on its site, but says about 10,000 new campaigns are created every day – about one every eight seconds. There’s no charge to set up a campaign. You can ask for any amount of money, leave the campaign running as long as you want, and keep whatever comes in.

Pogue said, “There’s people who are gonna see this who are gonna go, ‘It’s that easy? I could do that for myself?’ So, should we set some expectations on how many of them actually succeed?”

“They don’t always hit their goal,” Solomon said. “The reality is, you have to tell a very compelling story. You have to be very transparent about what you’re doing. You have to share your campaign.”

Sharing means spreading the word, by mouth and on social media like Facebook and Twitter. Some hope their stories go viral or get picked up by the news media.  “The more eyeballs you can get on a fundraiser, the more potential it has to raise money,” Solomon said.

“There’s no way that would work,” Pogue said.

“It works. It works very well!” Solomon laughed. “The majority of people who donate on the platform actually leave a small tip.”

And while it is wonderful that this for-profit, Silicon Valley tech company is actually helping people every day, it’s not all sunshine and bunnies. Whenever a lot of money changes hands, there are always scammers nearby. People sometimes fake having diseases to dupe donors on GoFundMe – like Jessica Anne Smith, a 32-year-old mother who said she was battling cancer. She claimed she was being treated at Penn Medicine, and scammed people out of more than $10,000 through a GoFundMe account.

And then there was Katelyn McClure and Mark D’Amico, the New Jersey couple who raised over $400,000 to help Johnny Bobbitt, Jr., a noble homeless man. Turns out their feel-good story was a fraud; the three of them were working together to scam the public.

Pogue asked Solomon, “What’s to prevent that sort of thing from happening?”

“We’ve probably added 100 people just focused on nothing but Trust & Safety, as we call it,” he replied. “We’re using a lot of technology; we use machine learning and artificial intelligence.

“It’s very rare. We have less than 1/10th of 1% of our campaigns have any type of misuse associated with them.”

Of course, that number includes only the scams that GoFundMe catches. Fortunately, when it does, GoFundMe says it refunds all donations.

“Anytime you have a fraudulent transaction, I think that raises a lot of concerns, because it reduces trust and reduces incentives to give,” said Una Osili, the associate dean for research at the Lilly Family School of Philanthropy at Indiana University. She studies the economics of charity.

“Transparency matters,” Osili said. “Today’s donors are looking not just to connect with another person, but to have an impact, and also see, in a transparent way, how their donations are making a difference. I think technology can afford that type of transparency.

“Crowdfunding is quite simple, in the sense that it’s actually been in existence for a long time. One of the most famous and earliest kind of big examples of crowdfunding dates back to the 1880s, at the time of the Statue of Liberty. Joseph Pulitzer actually led that campaign to bring ordinary Americans to help fund the base of the Statue of Liberty. And there were more than 160,000 donors, and 75% of them gave less than $1.”

Pogue asked, “If people give money to crowdfunding campaigns, are they then less likely to give to traditional charities?”

“So far we are not seeing that in the data,” Osili said. “Crowdfunding is still relatively small. A lot of money is being raised on these platforms, but compared to more traditional fundraising campaigns, crowdfunding is still a small slice of the pie.”

“What we are seeing, though, is that crowdfunding is changing and shifting how nonprofits raise money, to use social media, to tell their stories in a more compelling way.”

Meanwhile, CEO Rob Solomon encounters the best and the worst of human nature every day. “If bad things happen, it’s like a dagger in the heart. I hate that,” he said. “But I think people are innately good.”

“It’s true!” Solomon laughed. “I can prove it every day.”

As for Morgan Stickney: her fight continues. She goes to physical therapy a few times a week near her home, and is part of an ongoing study at Brigham and Women’s Hospital, where she had both of her revolutionary procedures, known as Ewing amputations. Researchers hope studying Morgan will help future amputees.

She will soon get a second prosthetic leg to match her first one. “It has mermaid scales on it,” she laughed. 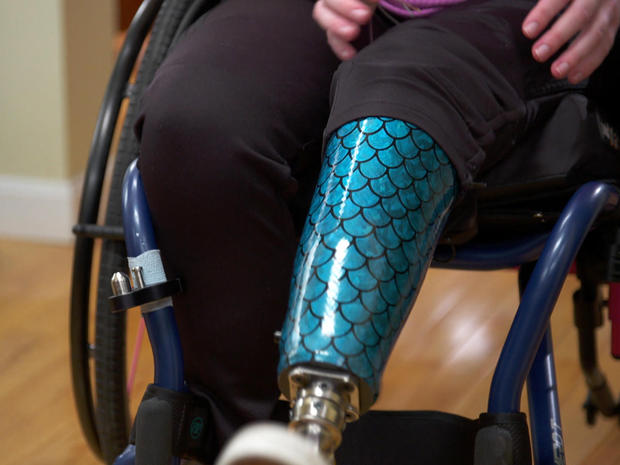 “For a swimmer, of course,” said Pogue.

She’s still adjusting to life as an amputee, which will include making her home more accessible for her to get around and learning how to drive a car with hand controls – things not covered by insurance, but that will help Morgan regain her independence.

In the new year, Stickney hopes to be back in the pool, training for the 2024 Paralympic Games, cheered on by her GoFundMe supporters, one of whom wrote her, “Never stop dreaming because your legs don’t define who you are!”

“And to hear that people from all over the country believe in me, and that they think that I’m an inspiration, means a lot to me,” she said, “because I’m just trying to live my life and get back up on my two feet!”