A social media influencer from New York City took “do it for the gram” to new heights this week, when she reportedly staged her own elaborate wedding engagement. Although she said the proposal was a “surprise,” some reporters turned up evidence that it had all been planned and marketed to brands ahead of time.

Influencer Marissa Casey Fuchs, known on Instagram as @fashionambitionist, posted several photos and videos on her Instagram this week to let followers know something huge was going to happen. The first post was a video made by her boyfriend, fellow influencer Gabriel Grossman.

In the video, Grossman tells Fuchs that he needs to ask her an important question – insinuating he’s going to ask her to marry him. But since they don’t like traditional weddings, he said, he thought, “What would Marissa want? How could I marry her in a way that would incorporate everything that’s important to her?”

The solution, he said, was “An extraordinary adventure, unlike any proposal ever seen.” Fuchs posted her boyfriend’s “proposal” video to her own Instagram, claiming she didn’t know what was happening. She then posted a video of her reaction, in which she cried when she saw Grossman’s video.

What followed were detailed Instagram “stories” chronicling Grossman’s elaborate proposal-wedding hybrid. He flew Fuchs to Miami, where she had dinner in a private dining room at Prime 112 with her friends – a mini bachelorette party before their “spontaneous” wedding.

After going shopping at Zara and Neiman Marcus, Fuchs finished the first stop on her engagement trip – Miami. She stayed at 1 Hotel South Beach, according to another post. Almost all of the brands she came in contact with were tagged. @fashionambitionist

Then, the couple hopped on a plane to Paris. But first, Fuchs had to go shopping for clothes – because the trip was a surprise, she said, she didn’t pack. Fuchs did “some serious damage” at Zara, picking up $400 worth of clothes, she told followers. She also stopped at stores like Neiman Marcus — and she tagged each brand on Instagram as she posted about her shopping trip.

While followers and media companies watched the fairytale engagement unfold, one reporter knew something they didn’t: Fuchs had apparently pitched the engagement story to several brands ahead of time in hopes that they would sponsor it.

“They knew the couple’s engagement hashtag. They knew what hotels Fuchs would be staying at, where she would eat, and when she’d post to her feed,” wrote Atlantic reporter Taylor Lorenz. “They had seen it all before, in an alleged pitch deck. The viral proposal appears to be a meticulously planned marketing stunt.”

Lorenz got access to the deck, which details the full four-day-long engagement that Fuchs’ boyfriend supposedly planned for her. It chronicles the engagement trip from New York to Miami to Paris, listing all the places they planned to stay and eat, and when they would post to Instagram.

Lorenz says a PDF of the itinerary was sent to marketers at various brands and agencies months in advance. The deck offers brands the “opportunity to align with this momentous occasion and the beautiful cities she will be visiting along the way,” according to one of the slides.

Many influencers, like Fuchs, are paid by brands to promote products, restaurants and hotels on their Instagram pages. Their rate depends on how many followers they have. Fuchs has 195,000 followers, Grossman has 10,600.

In 2017, the Federal Trade Commission started cracking down on influencer ads and sent dozens of letters to “celebrities, athletes, and other influencers,” as well as marketers, reminding them that “influencers should clearly and conspicuously disclose their relationships to brands when promoting or endorsing products through social media.” In 2018, the U.K.’s Advertising Standards Authority created similar rules. 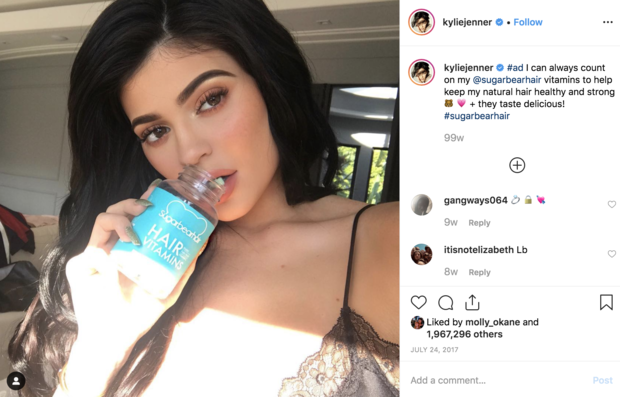 Influencers and celebrities like Kylie Jenner are required to write #ad when they are promoting a product. The rate they are paid to post an advertisement depends on the amount of followers they have. @KylieJenner

These regulations led to the advent of “#ad.” Now, influencers who are paid to promote a product must always include #ad in their post to let followers know it’s an advertisement. Fuchs did not include the hashtag in any of her proposal posts.

Some influencer ads are more blatant than others. Fuchs’ engagement extravaganza was not so obvious – until her alleged pitch deck started making the rounds on Wednesday night, Lorenz writes.

Once the deck started circulating, Fuchs’ friend Elicia Blaine Evans reportedly tried to squash the rumors, taking over Fuchs’ phone to set the record straight. Grossman also tried to dispel rumors, saying Fuchs had no prior knowledge of his plan. He told The Atlantic that Evans concocted the deck for him, and that most brands didn’t actually respond to it. He said none of them had received payments.

Grossman did say, however, that Evans helped him get a partnership with Flytographer, which provided them with photographs for free. He also said he received free services and goods from companies he already had relationships with. He reiterated that the whole thing was planned by himself and Evans – not Fuchs, the unassuming bride.

Fuchs’ Instagram followers, however, weren’t buying it. “Everyone who thinks this is real is a total ditz…good marketing strategy tho,” one person commented on one of Fuchs’ posts.

“Why are you lying about everything? Your pitch deck is on Twitter,” someone else commented.

At least three Instagram accounts dedicated to weddings – The Knot, Wedding Chicks and Betches Brides – had been following the engagement and chronicling the events on their own Instagrams, which gave the couple even wider exposure. It is unclear if these brands agreed to do this for Fuchs and Grossman ahead of time.

It is still unclear if any of the brands Fuchs and Grossman mentioned in their stories paid them to do so, or if those brands saw the pitch deck.

While some fans are angry that Fuchs’ “surprise” engagement story appears to be a sham, there could be wider implications of this alleged scheme. The FTC has cracked down on undisclosed ads before – even addressing “the need for endorsers to adequately disclose connections to brands through law enforcement actions” on their website.

CBS News has reached out to Fuchs, Grossman and Evans for comment. It is unclear if the FTC will take action, but for now, the social media scandal hasn’t seemed to faze Fuchs. She had around 160,000 followers when The Atlantic broke the story; she now has close to 200,000. And while some people are leaving disappointed comments on her page, she’s busy enjoying her engagement-turned-wedding.