SULLIGENT, Ala. (WCBI) – A Lamar County man is behind bars, accused of assaulting a senior citizen.

Richard Devin Lewis is charged with felony elderly abuse and misdemeanor assault in the third degree. 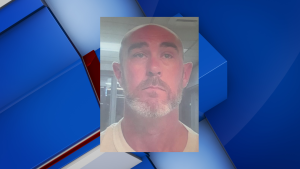 The charges stem from an incident last Saturday in the 4 thousand block of Highway 278 in Sulligent.

According to Sulligent Police, 2 elderly males drove onto Lewis’s property to look at a lawnmower.

As they were leaving, Lewis allegedly came out of a house with a gun and yelled for them to stop.

Police say the passenger got out of the vehicle to talk to Lewis, and Lewis pushed the elderly man, causing him to fall to the ground.

According to Police, Lewis then began hitting the man in the face and head.

The man was able to get to his feet, get into the vehicle, and get away from the scene.

He was taken to the hospital.

“I think it’s very important that not only do we protect everyone, but we especially have to protect our elderly,” said Chief Rick McDaniel, Sulligent Police Department.

The victim had heavy bruising around both eyes and injuries to his head.

Richard Devin Lewis is in the Lamar County Jail. His bond has not been set.