Landlord accused of evicting people to list apartments on Airbnb

A Los Angeles landlord illegally evicted tenants from their rent-controlled apartments and listed them on Airbnb, a lawsuit filed this month alleges. The suit accuses real estate developer Wiseman Management of tearing down rent-controlled housing to build luxury developments, depriving “immigrant, low-income, disabled, and elderly apartment tenants of their legal rights in order to put money in its own pocket.”

Tearing down rent-controlled housing to build new developments is legal in Los Angeles. But the conversion of long-term affordable housing into hyper-profitable short-term rentals is a growing problem in cities from New York to San Francisco, where housing advocates often clash with home-sharing apps.

Los Angeles’ rent control law covers about three-quarters of the city’s 620,000 rental units, but it also includes a number of exceptions that many tenants don’t know about. One of those loopholes, known as the Ellis Act, allows a landlord to take an entire building off the market — in order to live in it themselves, tear it down or convert the property into condos — as long as they give tenants a 120-day window to move out and some relocation funds.

The eviction came as a surprise to Jianna Maarten, a filmmaker who had lived in a two-bedroom apartment on Hollywood’s North Formosa Boulevard for 10 years, sometimes with her 63-year-old mother, Joanne Maarten.

“It was my first real apartment in Los Angeles. My best friend lived two doors down. I knew everyone on the street,” recalled Jianna, who is her late 30s.

In early 2016, Wiseman acquired the Maartens’ building and two neighboring buildings. That March, the new owners told the tenants they had four months to leave.

“I didn’t know about no-fault evictions, I didn’t know [the Ellis Act] existed,” said Jianna. “I was devastated and it was hard to get help.”

While the other tenants left, Joanne Maarten, who has a disability, was legally able to delay her move-out date by a year. Over that time, workers installed keyless locks on other apartment doors, put in new Ikea furniture and listed the units on Airbnb, according to the lawsuits.

“It was entire families of people staying in these apartments,” Joanne recalled.

A neighbor’s lawsuit prompted Wiseman to remove the Airbnb rentals, at which point, according to the Maartens’ suit, the management company essentially abandoned the building. They stopped maintaining the grounds. They removed the keyless locks without replacing them.

The empty apartments were soon occupied by squatters. The women said they received calls from one of Wiseman’s owners, Michael Cohanzad, demanding they leave the building. They left in June 2017, and the building was demolished the following year, according to city records. Today the parcel holds a luxury rental building. 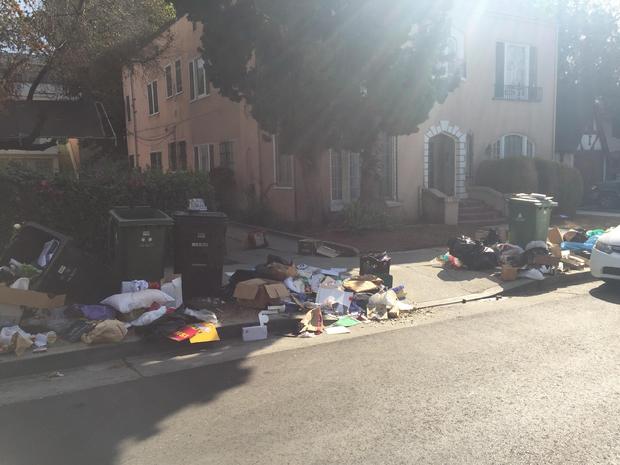 The exterior of 1342 North Formosa Avenue after the owners stopped maintaining the grounds, according to the Maartens. Courtesy Jianna and Joanne Maarten

“It was very effective, to be honest. You do not want to live in your apartment and have a homeless person parked outside your window screaming all night,” said Joanne.

Wiseman denies wrongdoing, and says the firm evicted Joanne Maarten for not paying rent, according to legal filings. The company did not respond to requests for comment on this story.

Wiseman is controlled by the Cohanzad family, who own 35 rental buildings in Los Angeles.

But they’re far from the only landlords accused of driving out longtime tenants in the city. Since 2000, more than 26,000 rent-controlled apartments have been removed from the rental market under the Ellis Act, according to the Los Angeles Housing and Community Investment Department.

“It’s really one of the biggest problems in housing right now,” said Tony Carfello, a member of the Los Angeles Tenants Union.

Homelessness at an all-time high in Los Angeles

While the Ellis Act has been on the books since 1985, it was only at the turn of the century — as real estate prices surged during the tech bubble — that developers started using it to chase away residents, according to tenant groups.

“That’s when you see it used as a tool to push people out of buildings,” Carfello said. For developers, “It becomes part of the investment going forward for rental properties.”

The number of apartments losing their rent-controlled status under the law stayed relatively low during and after the Great Recession. Then, in 2014, they shot up to more than 1,000. Last year, 1,822 rent-controlled apartments came off the market. So far this year, 1,300 have been lost, city data show.

“I’m not going to get my building back”

Zaaverei said that hundreds of former tenants could be eligible to join the suit, given that the Cohanzad family manages dozens of rental buildings and over 100 units. “This could be a very large class action,” he said, noting that he represents 15 tenants so far. “We want to set an example and lay down the marker that there is somebody out there looking out for these tenants.”

After leaving her apartment, Joanne Maarten moved to a small desert town in San Bernardino County some 130 miles east of her former home. “Me and the desert, we’re getting used to each other,” the L.A. native said. There was no buyout from Wiseman, she said, because the company disputes her status as a tenant.

Los Angeles has recently tightened its laws around Airbnb listings to exclude affordable housing and limit the number of units an Airbnb host can list to a single residence. Airbnb said it will comply with the city law, and starting next month will remove rent-stabilized buildings in Los Angeles from its platform. (The company was previously sued by another set of Wiseman tenants whose apartments were listed on the platform; that suit was later dropped.)

Airbnb has a history of feuding with host cities when they try to regulate short-term rentals. In New York, where it’s illegal to rent an entire apartment for less than 30 days, Airbnb has pushed against a ban on advertising illegal rentals and is fighting to keep secret the identities of hosts who rent out large numbers of units on its platform.

Airbnb has been blamed for contributing to dire shortages of housing and spurring gentrification in low-income neighborhoods in numerous cities, which it denies. In Jersey City, New Jersey, Airbnb spent $4 million to try to beat back local limitations on short-term rentals. (It failed — Jersey City voters approved them this week by a 2-to-1 margin). It’s been successful in fighting similar rules in San Francisco and in San Diego, where, over Halloween this year, five people were shot at a popular Airbnb rental. The company also has sued municipalities from Boston to Palm Beach, Florida, over laws requiring Airbnb and others to collect taxes from their home-sharing hosts.

In a statement provided to CBS News, Airbnb said: “We have supported regulations across the country — including in San Francisco, Los Angeles and elsewhere — that prohibit short-term rentals in affordable housing. In Los Angeles, starting this month we will remove listings in rent-controlled and affordable housing units to comply with the city’s new home-sharing ordinance. Simply put, there is no daylight between us and cities working to preserve public housing, and we will continue to work with leaders around the country to enact regulations that promote responsible home sharing.”

Added Joanne, “I’m old and I come from an old mentality that integrity is more important than money, but it isn’t, evidently.”