COLUMBUS, Mississippi (WCBI) – After a brief taste of fall, hot weather is set to develop into the Southeast next week.

Even though highs this week have been in the 80s, highs in the 90s to even near 100 degrees are possible for most of next week. 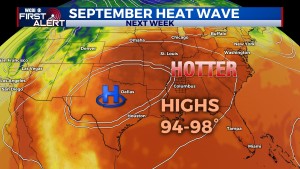 This is thanks to a strong ridge of high pressure developing across the southern states. Continued dry weather is in store as well, which will likely mean worsening drought conditions for north Mississippi.

Columbus’ record high temperature for next Wednesday is 102°. While we aren’t forecasting quite that hot, highs in the mid to upper 90s appears reasonable from Tues-Thurs.

Tupelo drive-by shooting sends one woman to the hospital