SUMMARY: Another front is set to sweep through the region by the middle of the week, and the air behind it will be quite refreshing for Thursday and Friday!

TUESDAY: A stationary front remains parked just southeast of the region, and the best chance of rain will be just outside the area today. Expect plenty of sun with highs in the mid to upper 80s with tolerable humidity levels. 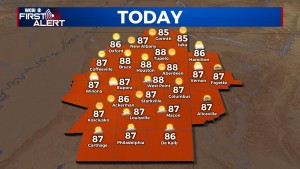 WEDNESDAY: A cold front will move across the region, but moisture will remain limited along and just ahead of it. As a result, rain chances remain out of the forecast for now…even though a few brief spritz showers or sprinkles aren’t out of the question.

THURSDAY/FRIDAY: Behind Wednesday’s front, another brief taste of fall is in store for north MS and west AL. Expect plenty of sun both days with highs in the middle 80s, but the mornings will be quite crisp in the low 60s and upper 50s!

WEEKEND: The days will remain warm with highs in the upper 80s as humidity levels remain in check, though a return to a more summery heat and humidity pattern looms for early next week.