Correspondent Erin Moriarty and “48 Hours” investigate a double homicide that captured the nation and take a fresh look at a very cold case that turns up surprising results in “Lizzie Borden Took An Axe” airing Saturday, March 28  at 10/9c on CBS.

It’s a fact. Many people are squeamish when it comes to talking about bodily functions like a woman’s monthly menstruation.  So, did a young suspect take advantage of that discomfort to get away with two murders? Did she clean up a blood trail and place the evidence out in the open, knowing that male investigators wouldn’t take a closer look? That could explain why a case that took place more than a century ago continues to baffle crime experts to this day.

The suspect in question is Lizzie Borden.  On the morning of August 4, 1892, Lizzie’s father Andrew Borden and her stepmother Abby were found murdered in the family home in Fall River, Massachusetts.  They had both been bludgeoned to death with a sharp object, believed to be a hatchet.

Lizzie, 32, quickly became the main suspect, with both motive and opportunity. She hated her stepmother and stood to inherit millions in today’s money from her father’s death. What’s more, while her older sister Emma was miles away visiting friends at the time of the murders, Lizzie Borden was at home with no credible alibi. The investigation revealed that, on the day before the murders, a woman identified as Lizzie reportedly tried to buy prussic acid to repair, she said, a sealskin cape. A suspicious druggist refused to sell it to her.

The circumstantial evidence pointed to Lizzie. And yet, where was the blood? Investigators were stumped by a lack of blood evidence linking Lizzie to the murders. Abby Borden, who was murdered first in an upstairs bedroom, had been struck as many as 19 times. Andrew, struck while sleeping on a couch, was hit multiple times in the head. If Lizzie was the killer, wouldn’t she be covered in blood spatter? Wouldn’t she have left a trail of blood? A next-door neighbor, who came to the house shortly after Andrew died, saw no blood on Lizzie or her clothing. Two days after the murders, cops searched the house and found no blood-soaked clothing. The only blood found on Lizzie Borden was a tiny speck on an underskirt. 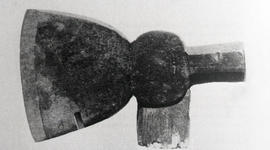 Lizzie Borden case: Images from one of the most notorious crime scenes in history

Over 100 years ago Lizzie Borden was arrested and charged with the brutal murder of her father and stepmother. See what police found at the scene…

In fact, evidence of a cleanup may have been in front of the officers all along and they discounted it. When investigators searched the house, they encountered what appeared to be bloody cloths or rags in a pail in the basement. When Lizzie indicated that she was menstruating, a fact confirmed by the family doctor, investigators took her at her word and moved on, never actually examining the contents of the pail. Later, the family housekeeper, Bridget Sullivan — who had done the family laundry earlier in the week — wondered why she had not seen the pail at the time, but it was too late.

If, in fact, that pail contained evidence of a crime-scene cleanup, then the person who put those rags there had clearly planned the murders, gambling on the well-known male reluctance to deal with female bodily functions. It may have been a brilliant plan that not only helped clear Lizzie Borden of murder, but left us all still fascinated by a crime that will never be truly solved.