Now, 45-year-old Antonio Cockrell is charged with possession of methamphetamine, along with trafficking meth, cocaine, and marijuana. 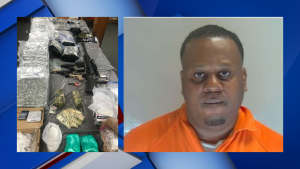 He says after meth was found during the stop a search warrant was given for Cockrell’s Sylvan Road home.

Several guns and about ten thousand dollars were also found in the house.

Hawkins says the investigation started two years ago with a tip from the community and his deputies were able to build a case.

“People that live in this area didn’t suspect this kind of activity is going on at the residence, but he was a substantial dealer, drug trafficker in our area,” said Sheriff Eddie Hawkins.

Cockrell is a convicted felon.

Hawkins says his deputies always follow up on tips from the community and that’s what it takes to make these types of arrests.