COLUMBUS, Miss. (WCBI) – A Columbus park is being closed to the public.

The U.S. Army Corps of Engineers, Tennessee-Tombigbee Waterway made the announcement on social media Friday. 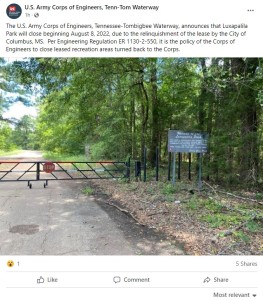 It is the policy of the Corps of Engineers to close leased recreation areas turned back to the Corps.

The city of Columbus returned the park to the agency.

It has been plagued with overgrowth and vandalism over the years, along with other issues.

Christopher Lick was sentenced to 78 months in prison

After a record breaking high gas prices are starting to decrease