COLUMBUS, Miss. (WCBI) – A man wanted in connection with a shooting in East Columbus in December has been found in the Noxubee County Jail.

Columbus Police made the trip down to Macon to pick up Demarcqueis Clark.

He is charged with Shooting Into a Business and 2 counts of Domestic Violence/Aggravated Assault.

Clark is one of the suspects in a shooting that took place in the parking lot of a shopping center behind McDonald’s on Highway 182 in East Columbus.

One person was grazed by a bullet in that shoot-out, and 5 cars were hit. 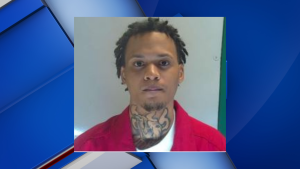 Clark had been out on a bond on a Manslaughter charge in Noxubee County.

In 2020 he was indicted for the December 2019 shooting death of Jemarcus Taylor in the parking lot of the Airport Food Mart near Macon.

The investigation into the McDonald’s shooting is still open, and Clark could face more charges.