MERIDIAN, Miss. (WCBI) – After a night on the run, a suspected cop killer is in jail in Meridian. 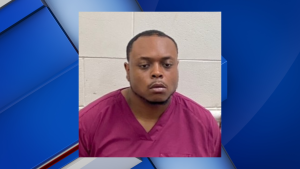 Croom and other Meridian Police officers were called to a domestic violence incident around 5 PM Thursday afternoon.

When they got to the scene, they found a victim who had been shot and the suspect.

Croom exchanged fire with the suspect and was hit.

“When officers checked the residence, they discovered a female, Brittany Jones, inside, suffering from a fatal gunshot wound. Miss Jones was pronounced dead at the scene. Officer Croom was transported to a local hospital, where he was pronounced deceased,” said Chief Deborah Young, Meridian Police Department.