COLUMBUS, Mississippi (WCBI) – Mild air hangs on for a couple more days before a prolonged stretch of dangerous cold arrives.

WEDNESDAY: Some are starting clear this morning, but clouds will overtake the region again through the day. Highs should surpass 50 degrees, but it will still feel damp and cool.

THURSDAY: The day stays cloud and mild for the most part as highs reach the 50s yet again. Scattered light rain should break out across north MS in the afternoon ahead of the well-advertised powerful front. As colder air rushes in, this light rain should change over to a mix of rain/sleet and then to all snow for most of the area after 6p. Gusty winds up to 40 mph may accompany the frontal passage. Light precip. intensity and increased wind speeds should counteract most accumulation, but a dusting could occur in areas closer to the TN line. However, any residual moisture will freeze overnight as temperatures drop to the 5-13 degree range. Dangerous wind chills are also expected, with feels like temperatures dropping below 0 to nearly -15 in some spots. 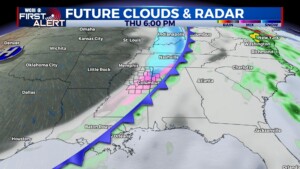 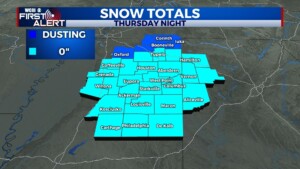 FRIDAY: Some clearing should occur behind Thursday’s front, but highs will struggle to the upper teens to lower 20s with single digit wind chills prevailing. Occasional flurries could also occur.

CHRISTMAS WEEKEND: Occasional flurries will continue both days, but expect a good deal of sun as well mixed with cloud cover at times. Highs will stay in the 20s Saturday. Most spots will at least get to freezing Sunday afternoon.

NEXT WEEK: Monday stays quite chilly with extra cloud cover, but the middle of next week looks to bring temporarily warmer air to the region…stay tuned!

Being active on social media is making a difference for businesses

Family searches for justice for their loved one who was shot, killed

Rain returns, but with a warm week