Authorities in western North Carolina say a mother tossed her baby down a 75-foot ravine and then concocted a story about a kidnapping. The baby was later found alive, and her claims unraveled.

Investigators believe Shaylie was in her car seat when she was tossed over the steep embankment, and then rolled out of it after hitting the ground.

Griffin said the baby survived “simply, in my opinion, by the grace of a merciful God.” She was admitted to the hospital but is believed to be in good condition, Griffin said.

Police in Asheville said they received a 911 call on Thursday afternoon reporting a mother and her child had been kidnapped from Biltmore Park, a mixed-use area in Asheville. They wouldn’t say who placed the call, but confirmed it wasn’t Madden. Police pinged Madden’s phone and traced it back to neighboring Henderson County.

Krista Madden WSP Henderson County sheriff’s deputies were called in around 5:30 p.m, investigators there received a call from a resident who had encountered Madden near a church on a rural road. Deputies responded and found Madden, and later her car abandoned a short distance away, Griffin said.

Deputies transported Madden to the sheriff’s station in an attempt to develop a suspect description, Griffin said. The woman told them she had escaped her alleged kidnappers, which Asheville police had initially described as a man and a woman with thin builds wearing ski masks. Authorities launched a search for the child, using canines to search the area near the abandoned car, but didn’t find the girl, Griffin said.

Then, just before 8 p.m., Henderson County investigators received another 911 call. A woman had gone out to check the mail when she heard what she thought was an infant’s cry and called her husband over to assist. He climbed down the steep ravine near their home and found Shaylie, her car seat nearby.

According to the 911 call obtained by TV station WYFF, the woman told a dispatcher the couple found a baby “down in the woods.” 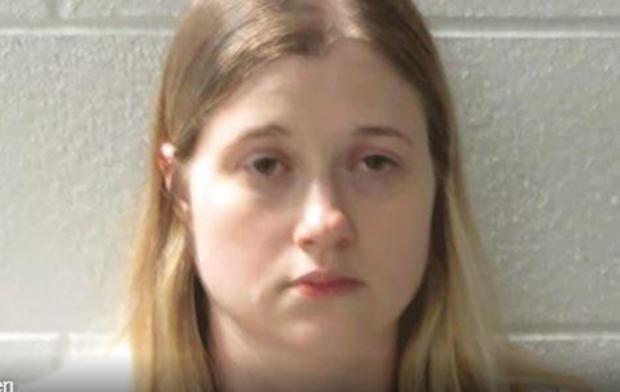 “There’s no people down here,” the woman said. “We’re in a remote area. Somebody must have pulled up beside and tossed her like a piece of trash.”

The woman said the girl’s head was “banged up” and her leg injured.

When asked about Madden’s kidnapping claim, Griffin said, “at this point we don’t believe that to be factual– none of that.” Griffin said he believes Madden tossed the girl over the ravine, and she was charged with attempted murder based on interviews and evidence at the scene. He said it’s likely Madden acted alone.

Madden appeared in court for a short bond hearing Friday and waived her right to a court-appointed attorney, according to WYFF. She was due back in court May 28.