The controversy around President Trump’s tweets last week comes at a time when nearly nine in 10 Americans see a nation divided along racial lines, and most believe the parties each hold different ideas about what makes a person an American.

A majority of Americans (59%) disagree with what the president said in his tweets last week about four Democratic congresswomen of color, including 44% who disagree strongly with what he said. But 40% of the country agrees with what Mr. Trump said. “‘Progressive’ Democratic Congresswomen” should “go back” to their countries, he tweeted last Sunday. 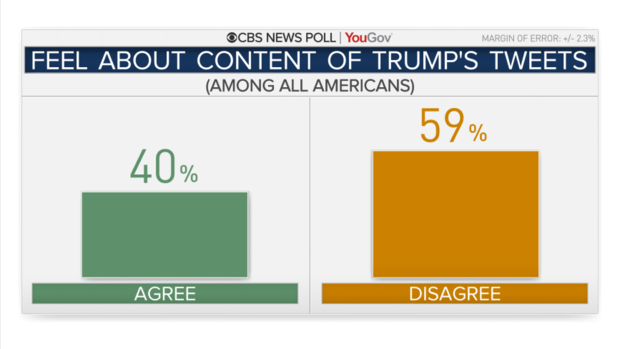 And in a nation which nine in 10 Americans believe is divided along racial lines, sharp partisan and racial differences define their views. Among Democrats, disagreement with what the president said runs high, at 88%. Most of those in agreement with the president are from his party, with 82% of Republicans agreeing, including 47% who strongly agree with the statements. Independents mirror the country overall — 58% disagree, including 41% who strongly disagree. 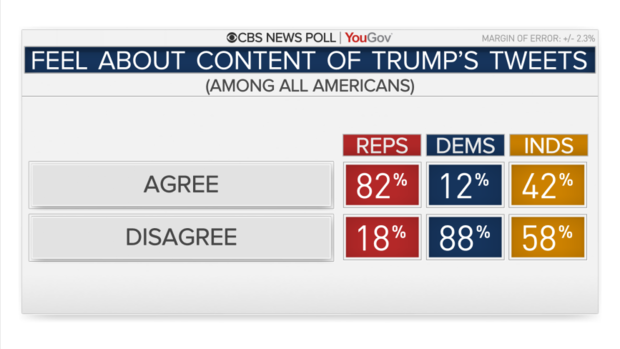 Overall, 48% of Americans describe the tweets as racist, and 34% feel they were not racist. 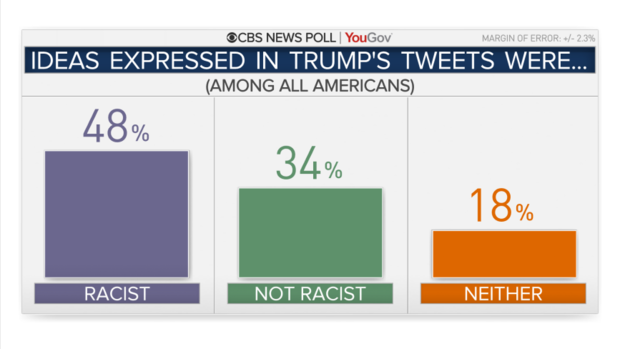 Whites are split: 41% call them racist, and 41% do not. However, among African-Americans, 76% describe the tweets as racist, as do a 54%-majority of Hispanics. There are age differences too: people over 65 are three times as likely to strongly agree with what the president said than are Americans under 30. And younger Americans are more likely than older Americans to call the tweets racist. 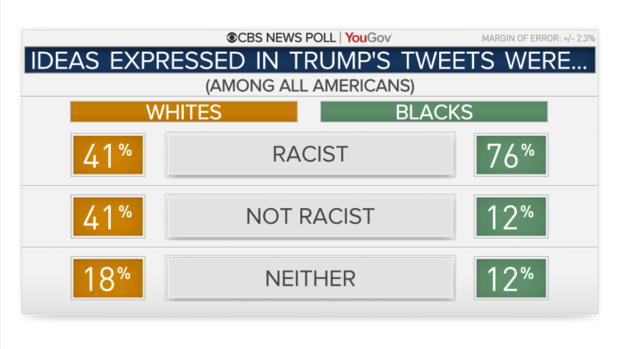 Most Republicans like the fact that the president tweeted those statements in the first place, and on this view, they stand apart from other Americans. While only 26% of Americans like Mr. Trump’s tweeting of the  statements about the Democratic congresswomen, 57% of Republicans somewhat or strongly like that he did so, and only 18% say they dislike it. Most Republicans feel the ideas expressed in the tweets were pro-American, and 70% feel they were not racist. 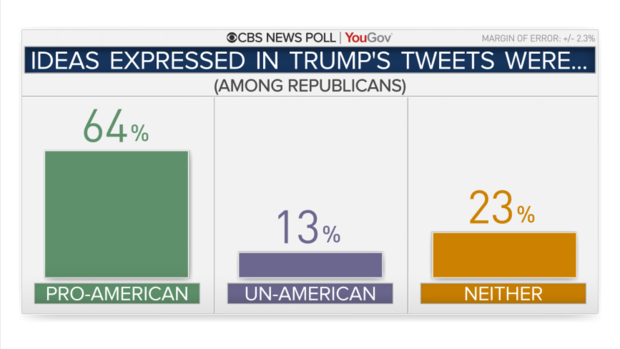 Republicans are, however, comparatively less likely to call the tweets presidential (43%). Seventy-seven percent of Republicans feel the media has given the tweets too much attention. 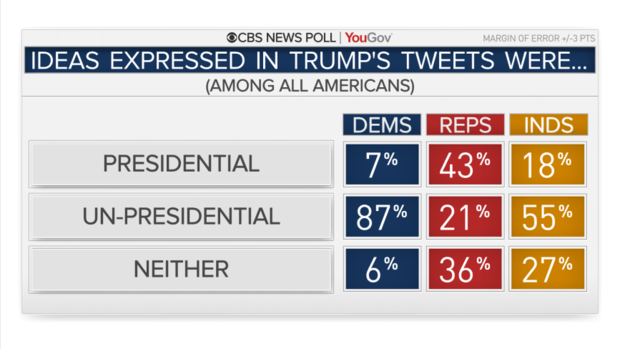 Most independents also call them unpresidential (55%)  and unnecessary (54%).

More broadly, 85% of Americans think Democrats and Republicans today have different ideas about what makes someone American, and on this, large majorities of both parties agree. And 87% think America today is at least somewhat divided along racial lines, with Democrats more likely than Republicans to say it is very divided. 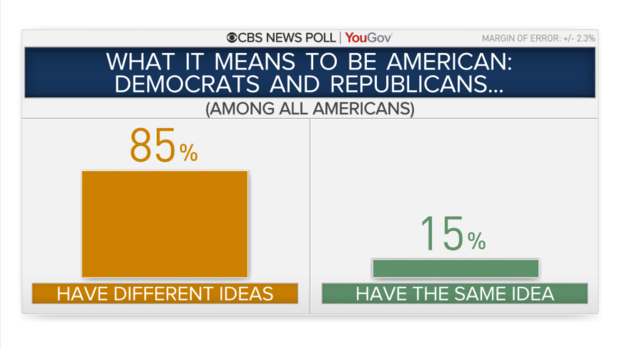 Congress today has more representatives of different backgrounds, races and religions than it used to. Most Democrats (63%) think this is making Congress better — though this may be related to partisanship, since many of those representatives are Democrats to begin with.

Forty percent of Republicans say this is making Congress worse, compared to 31% who say it has not changed things and 28% who feel it is making things better. 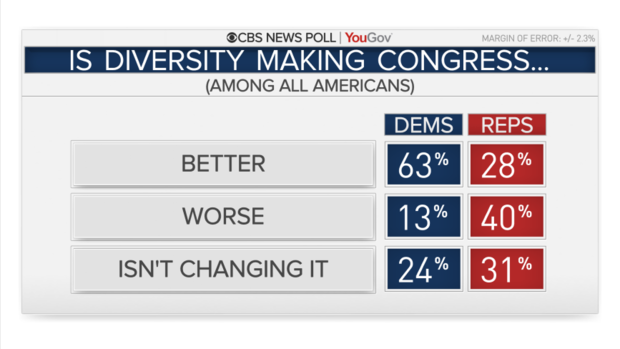 Reps. Alexandria Ocasio-Cortez, Rashida Tlaib, Ilhan Omar and Ayanna Pressley are better known to Republicans than they are to members of their own party, and as with many members of Congress, many Americans are unfamiliar with them.

Mr. Trump himself has overall negative favorability ratings, but he has the most favorable ratings of the figures tested, and is (unsurprisingly) the best known.

Partisan fault lines can be seen regarding the recent resolution passed by the House to condemn Mr. Trump for his Twitter statements, which passed on a nearly party-line vote. Seventy-two percent of Democrats approve of the resolution, with nearly as many Republicans disapproving. Most Republicans (66%) think the Democrats who voted for the resolution are just trying to damage the president. 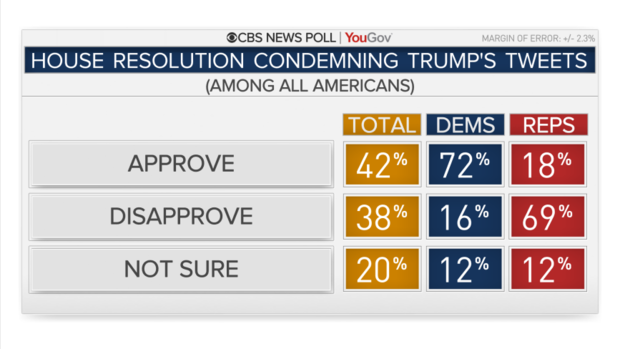 There is suspicion among partisans about how the other side treats people of different races. A majority of Democrats (80%) think the Republican Party tries to put the interests of whites over those of racial minorities, and 85% of Democrats think the president tries to do the same.

But 70% of Republicans think the Democratic Party tries to put the interests of minorities over those of whites. And Republicans believe their party and Mr. Trump try to treat all groups the same.

The CBS News survey is conducted by YouGov using a nationally representative sample of 2,099 U.S. residents interviewed online between July 17-19, 2019. This sample was weighted according to gender, age, race, and education based on the American Community Survey, conducted by the U.S. Bureau of the Census, as well as 2016 presidential vote and registration status. Respondents were selected from YouGov’s opt-in panel to be representative of all U.S residents.