Nine years after the last space shuttle flight, NASA plans to launch two U.S. astronauts aboard a SpaceX Crew Dragon capsule May 27 for a trip to the International Space Station, the agency announced Friday. The historic test flight will herald the end of America’s sole reliance on Russia for basic space transportation.

Without mentioning coronavirus safety protocols and the shutdown of multiple NASA field centers, agency Administrator Jim Bridenstine said in a tweet that the agency aims to “once again launch American astronauts on American rockets from American soil!”

BREAKING: On May 27, @NASA will once again launch American astronauts on American rockets from American soil! With our @SpaceX partners, @Astro_Doug and @AstroBehnken will launch to the @Space_Station on the #CrewDragon spacecraft atop a Falcon 9 rocket. Let’s #LaunchAmerica 🇺🇸 pic.twitter.com/RINb3mfRWI

He will be the lone American aboard the station until the SpaceX Crew Dragon arrives.

If all goes well, veteran shuttle astronauts Douglas Hurley and Robert Behnken, decked out in futuristic SpaceX pressure suits and driven to the launch pad in a Tesla SUV, will blast off from historic pad 39A at the Kennedy Space Center atop a Falcon 9 rocket at 4:32 p.m. EDT on May 27.

The slender two-stage booster will climb directly into the plane of the space station’s orbit, releasing the capsule to fly on its own about 10 minutes after liftoff.

From there, Behnken and Hurley, pilot of the final shuttle mission in July 2011, will monitor a mostly autonomous rendezvous, catching up with their quarry the day after launch. Following tests of the spacecraft’s navigation and manual control systems, the crew will move in for docking at the lab’s forward port around 11:30 a.m. on May 28.

Astronauts Robert Behnken, left, and Douglas Hurley will launch aboard a SpaceX Crew Dragon spacecraft May 27 for a test flight to the International Space Station. The long-awaited mission will be the first orbital launch of NASA astronauts aboard a U.S. rocket from American soil since the space shuttle’s final flight in July 2011. SpaceX

The Crew Dragon astronauts will be welcomed aboard by Cassidy, the station commander for Expedition 63, and Russian cosmonauts Anatoly Ivanishin and Ivan Vagner, launched April 9 from the Baikonur Cosmodrome in Kazakhstan.

Mission duration has not yet been determined. Originally expected to last just 10 days or so, the flight is now expected to span several months, possibly up to 110 days, to maximize research time aboard the station given a single Soyuz-launched U.S. crew member between now and the foreseeable future.

The mission will end with a splashdown in the Atlantic Ocean just off Cape Canaveral. It will be the first astronaut splashdown since the joint Apollo-Soyuz mission in 1975.

Before the coronavirus pandemic swept across the country, NASA managers were expecting huge crowds to gather along Florida’s Space Coast for launch, along with hundreds of journalists at the Kennedy Space Center. It’s not yet clear how that will play out given social distancing and other safety protocols.

The Florida space center is currently closed to all but essential personnel as part of NASA’s COVID-19 response framework. But Bridenstine said in a recent interview with Spaceflight Now the managers, engineers and technicians working to ready the Crew Dragon and its Falcon 9 rocket for flight are taking all possible precautions.

If a positive case of coronavirus is confirmed among the launch team, “depending on where it is and how the person is doing the work, it may or may not impact the mission,” Bridenstine said. “What we’re trying to do is (make sure) that if there is a case, that we can quickly identify the people that that person was in contact with, and do the tracing and get all the people that were involved off the mission and replaced with other people.”

“If there’s an outbreak, yeah, it will affect the date,” he said. “But we’re doing everything we can to minimize that eventuality.”

The coronavirus is a major complication in an already complicated set of interlocking initiatives aimed at insuring the uninterrupted presence of U.S. astronauts aboard the International Space Station. 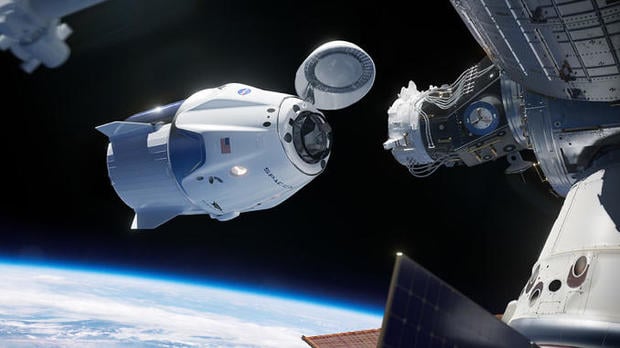 An artist’s impression of a Crew Dragon spacecraft on final approach to the International Space Station. NASA/SpaceX

As a hedge against possible downstream problems or delays in the agency’s commercial crew program, NASA is negotiating with Roscosmos, the Russian space agency, for a seat aboard the October Soyuz flight and another next spring.

But if the Crew Dragon test flight goes well, NASA is expected to launch a second Crew Dragon later this year carrying a crew of four: Mike Hopkins, Shannon Walker, Victor Glover and Japanese astronaut Soichi Noguchi. They would presumably remain aboard the space station for five to six months before returning to Earth.

The commercial crew program was launched following a 2004 decision by the Bush administration to complete the space station and retire the space shuttle by the end of the decade.

After a series of preliminary studies, a NASA-funded competition began in 2010 and on Sept. 16, 2014, the agency announced that Boeing and SpaceX would share $6.8 billion to develop independent space taxis, the first new U.S. crewed spacecraft since the 1970s.

SpaceX, initially awarded $2.6 billion, designed a crewed version of its Dragon cargo ship that will ride into orbit atop Falcon 9 rockets and return to ocean splashdowns. Boeing is designing its own capsule under a $4.2 billion contract that will rely on a United Launch Alliance Atlas 5 rocket for the trip to orbit. The CST-100 Starliner capsule will land in the western United States.

SpaceX launched a successful unpiloted test flight of its Crew Dragon in March 2019 and hoped to launch the first piloted mission that summer or fall. But a catastrophic explosion during a subsequent ground test threw SpaceX’s schedule into disarray. The problem eventually was resolved and additional tests were carried out to clear the way for launch in May.

The spacecraft familiar from past programs — Mercury, Gemini and Apollo capsules, their boosters, the Skylab space station and the space shuttle — were built by private industry but owned and operated by NASA.

The CCP contracts are considered public-private “commercial” agreements in which the companies, not NASA, develop the spacecraft design, are responsible for building and testing the hardware and flying the actual missions.

Under these contracts, the companies must meet specified milestones to get paid and both companies are required to fly two test flights to the space station: one without a crew and one with a minimal crew of two. Once certified, NASA will underwrite at least two and as many as six flights by each contractor. Both companies are free to launch their spacecraft on non-NASA, private missions carrying non-NASA crew members and/or payloads.