NMMC chosen for heroic acts by employees during pandemic


TUPELO, Miss. (WCBI) – The North Mississippi Medical Center has been named Grand Marshal of the largest Christmas parade in the region.

The ‘Reed’s Christmas Parade’ will take place December 1st in downtown Tupelo.  NMMC was named Grand Marshal because of the heroic work healthcare workers and staff have done over the past year and a half. 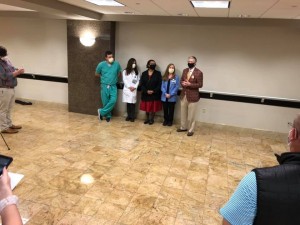 Jack Reed Jr., said selecting NMMC as the Grand Marshal for the 2021 Christmas parade is one way to honor those who have sacrificed so much during the pandemic.

During the announcement, four NMMC employees represented everyone in the system.

“It’s wonderful to have, as a local business, the opportunity to say, ‘thank you’ to some people who really deserve it, it’s a blessing to have this opportunity.  We’re proud, our store, employees at Reed’s , we go to work everyday trying to have a business our community can be proud of and this is something we’re proud to contribute back,” said Jack Reed, Jr.

“It’s a great honor for people to recognize us and see all the heart, and great work we have done for these patients here and all our teamwork and everything that goes on here in the hospital,” said Deanna Yates, critical care respiratory therapist.

The theme is ” A Magical Christmas.”   The parade takes place at 7 pm Wednesday December First.

Hot again Tuesday, much cooler Wednesday as rain moves in

Consultant advice for chief search ahead of search committee presentation